Fidel calls it a day 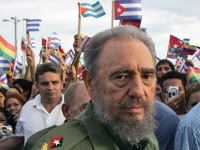 The BBC reports that Fidel Castro has retired as Cuban leader. Castro has survived a US-backed invasion, numerous assassination attempts and the fall of the Soviet Union, but after nearly 50 years in power his ailing health finally got the better of him.

His legacy will be a mixed one. Authoritarian rule, human rights abuses and the threat of nuclear terror in the Americas will dog his memory, but he will be remembered by the poor for providing them with education, health and a level of dignity they could not have otherwise expected in a continent where they are often treated like dirt, or worse.

We can only hope Castro’s retirement opens the way for badly needed democratic reforms. So long as journalists are being imprisoned and human rights are being abused, the Cuban revolution will have been a failure.