Well, somebody had to write about the flag referendum and in the apparent absence of any interest from other authors here’s my take on things ….. zzzzzzzzzzzzzz. Whoops, sorry, nodded off for a moment there.

Nearly 1.5 million voting papers have been received and the cut off is any minute now. That’s less than half the enrolled voters. Technically, there are 5 options, but I will be interested to see what option 6 (spoiled ballot) gets. I think there’s a chance that it will be the winner on the day, but of course, one of the other flag options will officially ‘triumph’, despite the likelihood that it will have minority support from the minority that bothered to vote.

Whichever one gets to go up against the current flag next year will lose comprehensively and the Prime Minister will have to settle for his legacy being the pandas Jon Jon and Ki Ki that I understand the People’s No 1 Revolutionary Zoo, Beijing, will be sending here about a fortnight before next election day.

Still it’s a kind of democracy folks, so we should at least be grateful that the Tories didn’t just auction off our national symbol to the highest bidder. I’m sure they considered it.

Oh well, as the song says: I run it up the flagpole and see who salutes … (but no one ever does).

I’ll update the post as the first results come through at around 8.30 tonight.

Update: Black, white and blue fern gets the thumbs up, one in ten votes is informal.

Update 2: Conspiracy theory alert! The red, white and blue fern was actually the most supported option, but lost on preferences. The fix is in! 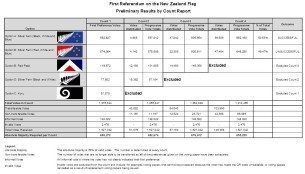 This post’s title bought to you by Harvey Danger. It’s also the theme to the superb UK comedy Peep Show.