On Monday, I wrote ‘Stay tuned for National’s next assets policy, due out sometime next week.’ It seems I miscalculated. Here’s what Key had to say on asset sales today on newstalkzb:

‘I’m going to go into an election with a group of policies and those policies we will implement or not implement as the case may be if it’s in the point of view if we’re saying we’re not going to sell something. We’re not going to sell assets and the reason for that is that there actually isn’t a strong argument for selling state assets. Forget about your ideological view. I’m actually not ideologically opposed to selling assets I’ve made that quite clear. So i could spend a bit of time selling off a quarter of Solid Energy as was our policy in 2005 and that was my policy so, as the finance guy [sic], or a few Landcorp farms but is that really going to drive higher after tax wages? If we ever change our minds and we ultimately decide that we do want to sell an asset then what we’re going to do is be transparent about that’ (I didn’t transcribe the ums and ahs for comprehensibility).

So, National “will implement or not implement as the case may be’ the ‘no-sale’ policy and Key leaves open the chance of asset sales in the first term in the final sentence.

Let’s add that to our list of Key’s asset policies:

As you will have noticed, the flip-flops are getting closer together. Let’s graph the rate of flip-flops, on a â€˜flip-flop per year’ scale since the last policy. 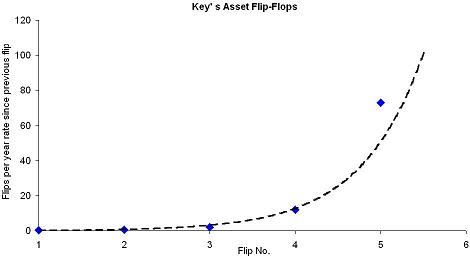 That’s right, it’s exponential. The flip-flops are coming faster and faster. Based on the formula, the next flip-flop should be in two days, to be followed by another 10 hours later. The tenth flip-flop from now will occur 0.6 seconds after the ninth. At the 16th flip-flop from now (around 63 hours away) the trend line goes vertical, John Key becomes a singularity, and a new Big Bang occurs. What that will do for Kiwis’ after-tax incomes, I’m not sure.

31 comments on “Flip-flopping at warp speed ”