Fonterra a failure in concept and in practice 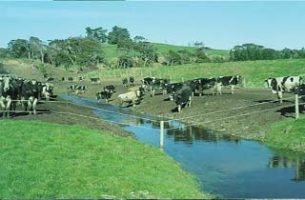 Fonterra as a construct – the establishment of a NZ Inc monopoly for the dairy industry – has been an abject failure for dairy farmers and a disaster for the environment.

In a stunning analysis from a quarter least expected, share market analyst, Arie Dekker of First NZ Capital, reveals there have been negligible increases in dairy farmer returns in the 17 years since Fonterra was formed, despite a 108 percent increase in milk production over that time.

“Taking inflation-adjusted milk prices from just prior to Fonterra’s formation to 2017 highlights very limited improvement in the total payout received by New Zealand farmers over the last 20 years,” he said in a note to investors.

“Despite some elevation in the payout evident for periods over the last ten years, it is hard to argue that the creation of a national champion in Fonterra has led to a sustained material upwards impact on the farm gate returns received by farmers over the last 20 years.”

Essentially, what Dekker is saying, is that the amazing and unprecedented degradation of our environment, particularly our waterways, in the last 20 years, under the guise of economic imperative, all has been for nothing.

Farmers have slogged away, doubling production for no improved return. Farmer and industry returns would have been no different had the whole movement of dairy conversion and intensification never taken place.

Not only that, but Fonterra’s shares have been a poor investment – their price over the last five years has fallen 3% against the NZX50 index’s 92% rise over the same period.

Dekker suggests the whole raison d’etre for Fonterra could come under intense scrutiny following the new government’s “surprise” announcement last month it will undertake a comprehensive review of the dairy industry.

He said that given that the Commerce Commission and previous government had just completed an industry review, and another review was scheduled in 2020/21, this announcement suggests the government clearly has an agenda.

It was also not surprising that environmental issues would come under scrutiny during the review.

“The inclusion of the Green Party in the Coalition Government accentuates the prominence that environmental matters will likely get and there is clearly some scope for matters regarding volume vs value-add and the environmental impost of dairy in New Zealand to overlap,” he said.

Agriculture Minister Damien O’Connor said the review would “allow a more strategic focus to be taken for issues facing the dairy industry, including, for example, environmental issues, land use and how to achieve the best outcomes for farmers, consumers and the NZ economy.”

The Labour-led government was likely to take a more holistic approach to all dairy matters and was likely to focus on farmer returns, the success the dairy industry and economy has had to move up the value curve and how more intensive land use to increase volume has affected returns, Dekker said.

The government was likely to support moves to place constraints on milk supply, which would help force the industry to consider adding value rather than volume, Dekker said.

His analysis throws into question the whole concept of pushing milk as a commodity and going for volume, something that was integral to the former National government’s economic strategy.

“Greater land use and intensification (as measured by cow numbers/hectare) only explains part of the increase in milk production with genetic improvement and greater intensity on other inputs likely explaining the rest,” Dekker said. 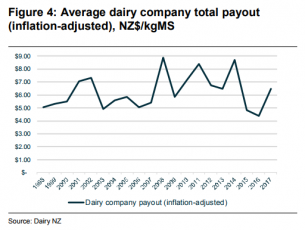 He said there has been an inability in New Zealand to “lift the mix of its output to value-add sufficient to flow through into better co-operative payouts”.

The co-operative’s share price reflects the failure to move away from commodity milk powder to value-add.

“For New Zealand farmers then, it is more in the increase in milk supply (a portion of which has come from more hectares and cows) that has driven an increase in their revenues over any strong evidence of material benefits from the New Zealand industry’s push into value add.”

Other inputs such as palm kernels, which also increase costs, also explain the higher volume.

Dekker said that if total milk supply in New Zealand is to be constrained following the review, Fonterra will have to look more and more offshore and that’s where the limitation of the company’s structure as a co-op will come into play – its lack of access to capital from cash-strapped farmers.

Fonterra as an investment has been a dog

It is interesting to contrast Fonterra with a company such as A2, which has put all its eggs into the value-add, intellectual property game.  The Auckland headquartered company turns over just $262 million against Fonterra’s $19.2 billion, has seen its market capitalisation soar to $6.5 billion, around two thirds of its giant neighbour.

Fonterra’s efforts to move offshore raise questions not just about the appropriateness of its structure but its ability to operate offshore. Basically, the evidence shows the farmer-run company is out of its depth.

Its move into China has gone from catastrophic to the merely financially disastrous.

It would be hard to imagine a worse investment than what Fonterra made in SanLu, whose melamine-tainted milk caused 294,000 Chinese infants to be ill or hospitalised, including six deaths. Some Sanlu staff were executed, at least one executive given a life sentence and one committed suicide. No Fonterra staff took responsibility. Fonterra had to write off its $200 million investment in 2009.

As a PR disaster, that’s almost impossible to top.

Still, in financial terms, Fonterra is giving it a go with its Beingmate investment in China. 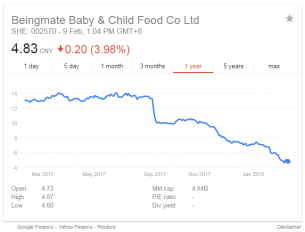 The idea of forming a global partnership with a Chinese player seemed sensible enough.

But another PR disaster, the botulism false alarm – which resulted in major customer, French company Danone, successfully suing Fonterra for $193 million, meant Fonterra was limited in its choice of potential Chinese partners and ended backing the wrong horse.

Beingmate was China’s largest infant formula manufacturer and distributor, founded by respected food scientist and entrepreneur, Sam Xie Hong. It offered Fonterra a huge distribution network for its Anmum infant formula brand. But the joint venture they set up, Darnum, has proved dysfunctional and Beingmate was a bricks and mortar retailer/distributor, a factor that proved fatal.

Two weeks ago, the previously profitable Beingmate announced the latest in a series of earnings downgrades – from a previously forecast loss of 350m-500 RMB to 800m-1b RMB (171m-$214m).

A serious board split and doubts about the reliability of its financials resulted in Fonterra saying publicly it was “extremely disappointed”.

The Shenzhen Stock Exchange, where Beingmate is listed, then requested the company to provide documents to the China Securities Regulatory Commission’s Bureau of Supervision. Beingmate reportedly sent a letter to the regulators blaming Fonterra for its losses, telling Bejing News, “due to a variety of reasons (most of which were caused by Fonterra) Beingmate had a sharp decline in operating performance and encountered business difficulties”.

“It has come to a point that the two parties could not reach agreement, which is seriously affecting the company’s business operation and development,” it added.

Business commentator Rod Oram, said in a Newsroom article that Chinese media are reporting Fonterra is seeking to take over Beingmate, something the co-op is denying. Such a desperate move is either bold or even more foolhardy.

FNZC’s Dekker says that Beingmate’s terrible financial performance is not as concerning as the reservations expressed by Fonterra members on Beingmate’s board about its financial management and reporting practices.

Pressure will come on Fonterra when it reports its half year results next month, “for a much more open discussion on Beingmate”, he said.

However, openness is not in Fonterra’s DNA. It won’t come easily any more than changing its untenable structure.

109 comments on “Fonterra a failure in concept and in practice ”