The Bankers’ Crisis is hurting people all over the world. From the deepest, darkest austerity in Greece, to the continuing foreclosure tsunami in the US, to cutbacks and job losses here, it’s the ordinary people suffering the hangover for the bankers’ wild decades of unbridled excess and profit. But at least the banks are suffering too, eh? Yeah, nah. 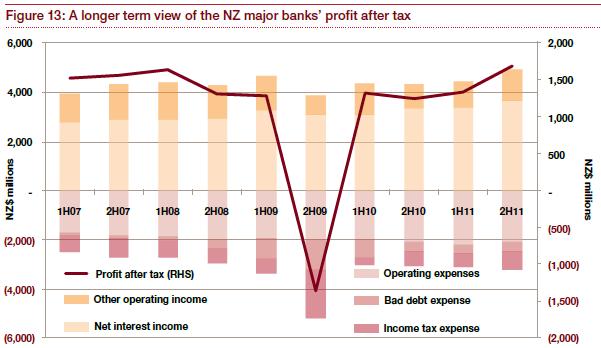 Over $3 billion a year in profit. Nearly all of that money is flowing offshore to the foreign banks. That’s equivalent to all exports of wool, wine, and fish put together going just on the profits for the Aussie banks.

Kiwibank has 4% market share but accounts for only 0.4% of the after-tax profits made by the banks. The rest is the Aussies.

And don’t forget that we’ve given these poor dears a 5% cut to their corporate tax rate in the past four years, which was worth about quarter of a billion to them last year. Every time you hear of some important service being cut, remember the Aussie banks are pocketing a million dollars per week day in tax cuts.

So, how are they making record profits? By getting cheaper funding from offshore and lowering savings rates here, while not passing the full benefits on to their customers. Again, Kiwibank is a stand-out, its interest expense is a much higher portion of its interest income than other banks – it pays better interest to savers and offers lower borrowing rates.

The second graph above shows how the banks’ profits have grown despite the amount they are lending being steady. The one below shows that what they’ve done is lend less to businesses for productive investment and more to the household sector – which has left the house price bubble still significantly intact (good news for the banks, which don’t want to write down the value of their loans).

So, we’re being creamed by the Aussie banks, who are fueling our housing bubble, not passing on their lower cost of capital to us, and reaping record profits, helped by the tax cuts we gave them.

Time to switch to Kiwibank, eh?