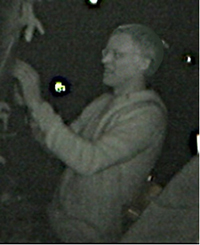 In a strange twist in the Franks billboard monitoring saga, infra red camera footage has revealed that Franks himself was responsibile for defacing his own hoardings.

Franks had previously claimed that he was the victim of an organised campaign to deface his hoardings and had installed infra red cameras to monitor his billboards. Photographic evidence revealed bored teenagers were responsible yet Franks has continued to insist “Mr Big” is still at large.

However, further evidence revealed today shows “Mr Big” is none other than Franks himself.