GCSB Bill to be debated today 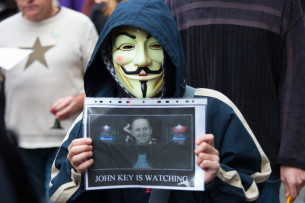 The Government Communications and Security Amendment Bill or to use its real name the Increased Spying and Hand Our Metadata over to the Americans Bill is the first bill in line to be debated today in Parliament according to today’s order paper.  As at the time of writing this post Peter Dunne’s magical summary order paper has just been put up on the legislation website, probably at 12 pm today.   This is frustrating.  As a matter of practice all SOPs should be put up as soon as possible, especially when they are having a fundamental effect on our civil rights.  How are you meant to have proper review of complex legislation with such little time to review?

I am sure that there will be keen interest to see how John Key can reconcile the extreme steps he took to protect his own privacy against the utter indifference he showed about the protection of Andrea Vance’s privacy.  And there will be perhaps even more interest in how Peter Dunne can say that the protection of his privacy is a matter of principle yet agree to support a bill because the price, whatever it was, is right.  A principle is a principle Peter.  Allowing there to be a review in the future, public access to the GCSB’s paperclip and coffee budgets and increased oversight and reporting of spying that has already happened does not cut it because the fundamental question of why there needs to be any increase in surveillance has not been answered.

Anyway the debate ought to be fascinating and I expect Labour and the Greens to oppose the bill strongly.  Tune in about 3 pm or so when the committee stages should start.

UPDATE:  The opposition has successfully filibustered the House for an hour and a half asking each other questions about Members’ bills.  And the Speaker has granted an application for an urgent debate on the Fonterra contamination scandal.  Also Meka Whaitiri’s maiden speech is to be delivered this evening at 5:45 pm.  It could be a long day …

37 comments on “GCSB Bill to be debated today ”