May 2016 didn’t record the highest land/ocean temperatures for any May on record! The world in May 1998 was 0.11 degrees C warmer than it was last month. Here’s another comparing the six warmest years on record to the long term average. (source page) 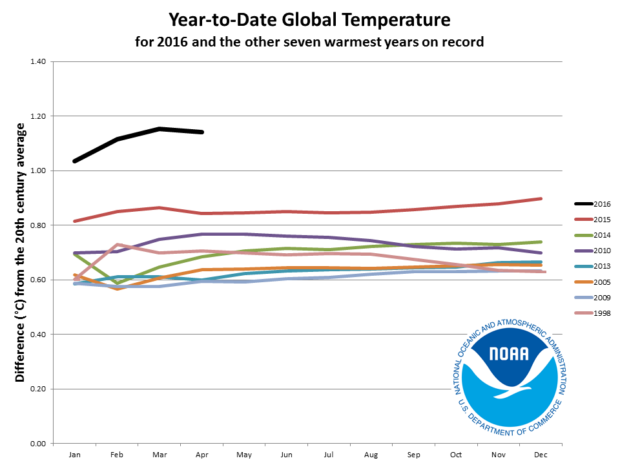 Here’s another for where we’re going at present. This one is only based on air temperatures.(source page)

It’s all kind of depressing and…actually, I’ll retract that. It’s frightening. What’s depressing is that I could throw all the graphs of rising temperatures and all the images of collapsing glaciers or ‘husked’ landscapes and all the stories like polar bears desperately eating sea birds and their eggs now, or point to yet another ‘once in a hundred year’ flood/drought/storm or whatever. And I could link to all the scientific reports and the easily understood presentations from eminent scientists – and those people who read or listen just carry on tomorrow as they did yesterday and as they’ll do today.

edit – Apologies. I don’t know why the spiral won’t animate. the link will take you to its source page.