Gould on the TPP

Yet another excellent discussion of the TPP yesterday:

Bryan Gould: Dairy tariffs still in place – why did we sign TPP?

Now that we are at last allowed to know a little more about the TPPA negotiated in our name, it is clear that the free trade goal that was said to be the main point of the exercise has not been achieved. Tariff-free access for our dairy produce into US, Canadian and Japanese markets has been denied to us.

Such small gains as have been secured are so insignificant that Tim Groser, the Trade Minister, could not even remember what they were. The best he could come up with was a small reduction over time in the Japanese tariff on cheese.
…
So, if the TPPA is not from our viewpoint really about free trade, what is it about? As Joseph Stiglitz, the Nobel Prize-winning economist, maintains, it is about managed, not free, trade – and trade that is managed in the interests of large, international, and mainly US corporations.
…
It represents, in other words, a further, large, and largely irreversible step towards the absorption of a small economy like New Zealand into a much larger economy – an economy that is increasingly directed from overseas, not by politicians or even officials, but by self-interested and unaccountable business leaders.

Perhaps the most obvious indication of that further shift in power is the Investor/State Dispute Resolution provisions included in the TPPA. These provisions allow overseas business interests to sue our government in specially constituted tribunals if they feel that the government has done or is likely to do something that might adversely affect their profits.

A democratically elected government carrying out its mandate, could – in other words – be compelled by a tribunal comprising just three unelected business people from overseas, to abandon its legislative programme and thereby give up a major power of self-government.
…
How can we have confidence in an arrangement that has been agreed in secret and over our heads, that has at the same time taken such care to consult and serve the interests of such a small group of powerful international business leaders, and that potentially has such a far-reaching impact on our ability to govern ourselves?

Plenty more in this excellent piece, go read the whole thing in The Herald. 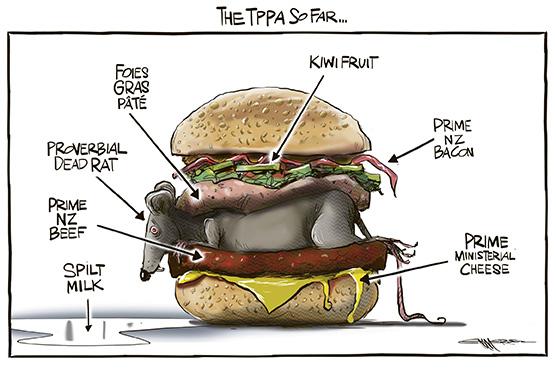