Green and you have kids? Really?

Here’s a quick way to reduce your carbon footprint: don’t have kids and save 80 years worth of human greenhouse gas output per child…

I said earlier in the week I’d have a post pushing the Voluntary Human Extinction Movement* (VHEM), and how to be truly green you need to seriously consider not reproducing ourselves.

Particularly in wealthier countries. We currently have over 7 billion people, while the world can only sustain around 4.4 billion people (and dropping as we over-use resources) – that’s with most people having a far worse standard of living than we’re comfortable with.  It’s more around 3 billion at first world standards – and that’s the very limit.

The New Zealand Institute‘s last presentation before merging with the Business Roundtable was recognising this fact.  We’re actually well-placed in New Zealand – our environment can sustain 9 million of us – but a world of truly scarce resources is still going to be a great challenge. 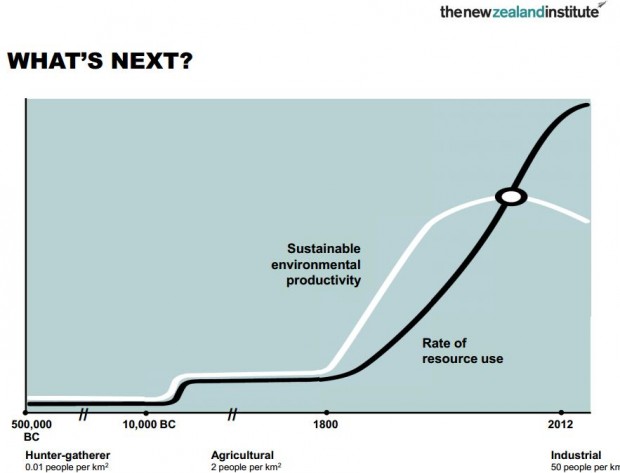 As countries deplete their resources they’re going to want to source them elsewhere – or move there.  How do we handle this?

And we’re also part of the climate change problem: 2 degrees worth of weather and climate chaos is now unavoidable, but what can we limit it to? We need to be part of the solution…

Apart from saving the planet – with all its biodiversity, rather than just viewing it as a human resource pool – VHEM see some good economic outcomes from reducing our numbers:

Our current economic system only seems to be dependent on an ever-increasing population. Actually, with increased density, some people benefit while others suffer. All non-human life suffers from human increase, but economic systems ignore that cost since it doesn’t have a price tag. So, let’s look at economics only as it affects the humans it’s meant to serve.

A large, expendable work force benefits owners, but it places labor at a disadvantage. Workers with dependents can’t afford to hold out on strike, or take chances on being permanently replaced. High unemployment reduces wages, while high demand for workers increases wages and benefits.

New housing provides jobs for construction workers and gains investors more capital for further development. However, much of the cost of increasing human habitat is borne by those who already live in the area: their taxes must increase to subsidize population growth. With a shift in priorities, maintaining and improving existing buildings could provide as many jobs as new construction provides.

Real estate speculators make money from rising property values, which are driven by demand for that property. Homeowners who wish to stay where they are must pay more in taxes when their homes are worth more on the market. [ … ]

Systems dependent on growth eventually fail, as pyramid scams and empires always have.

When our population density begins to improve, and sensible adjustments are made, economic systems as a whole will become more sustainable and potentially more just.

With technological improvements suffering from Jevon’s paradox and unlikely to save us, and every 10% efficiency gain soaked up by a decade or so’s population increase (before we consider massively increasing resource use to justly give the rest of the world our standard of living) it certainly leads you to ask:

* to be fair I’m personally more comfortable with the “no more than replace yourselves” school of thought. We may need more urgent action than that, but it’s a lot to ask of people.

73 comments on “Green and you have kids? Really? ”