This Guest Post by Standardista Molly explores different beliefs about femaleness and transness, and how we talk about those.

What can you do when what you say is not what is being heard?

This is a question I have been asking recently while watching (and participating) in discussions regarding both the Conversion Therapy Bill and the BMDRR Bill.

After watching the faces of the select committee hearing for Rex Landry’s submission on the BDMRR Bill, and the disdain shown to some submitters by the select committee members, I wondered how this is to be solved. Although, the method of delivery, and staccato points being made obviously were made to emphasise, the stunned manner in which it was received was obvious. And yet, she was not saying anything inaccurate. Stridency responded to with disdain.

Commentators online that I have previously interacted with and learnt so much from in the past, seem to be not comprehending what is being said, even though I, and many others are taking time to reiterate and clarify what we mean.

I believe this confusion around accurate language is an obstacle to robust debate.

I recently came across this 2015 article online from Slate that I think is worth consideration in terms of making sense of what is happening on The Standard and other online spaces, in this instance, where often what is being said is not what is being heard: Helen Highwater: The Trans Women Who Say That Trans Women Aren’t Women

Last month, a 42-year-old English accountant who goes by the pseudonym Helen Highwater wrote a blog post disputing the idea that trans women are women. Helen is trans herself; in the last few years, she says, she has taken all the steps the U.K.’s National Health Service requires before it authorizes gender reassignment surgery, which she plans to have in 2016. Yet she has come to reject the idea that she is truly female or that she ever will be. Though “trans women are women” has become a trans rights rallying cry, Highwater writes, it primes trans women for failure, disappointment, and cognitive dissonance. She calls it a “vicious lie.”

“It’s a lie that sets us up to be triggered every time we are called he, or ‘guys’ or somebody dares to suggest that we have male biology,” she writes. “Even a cursory glance from a stranger can cut to our very core. The very foundations of our self-worth are fragile.”

From the perspective of the contemporary trans rights movement, this is close to blasphemy. Most progressives now take it for granted that gender is a matter of identity, not biology, and that refusing to recognize a person’s gender identity is an outrageous offense. Highwater herself long believed that: “I came from a point—and I think most of us do—of really, really low self-worth and deep shame about who and what we are,” she tells me. “And when people started telling me that trans women are women, you’ve always been a woman, you have a woman’s brain in a man’s body and all this kind of stuff—it’s a lifeline. It’s something you can hold on to. It really helps you to come to terms with things and move beyond that shame.”

I fully understand and sympathise with that emotive reaction to certain looks or words and the triggering of deep underlying issues of self-hate and extreme body dysphoria. But is it healthier to address those triggers and bring about self-acceptance and love so that distress is reduced or removed, or to demand a societal change of language and continue to seek validation from external sources?

So, what is heard when women commentators on this site make statements like:

“Transwomen are not women”?

There is a very long (somewhat repetitive) video interview with Stephanie Davies-Arai. (I don’t know anything about the interviewer, but Davies-Arai was involved in the Keira Bell case against Tavistock).

… and all of this denial of, as soon as you say, that a boy is a girl, you have redefined all the other girls in the class. You have said that a girl is not a member of the female sex. Your most fundamental person, rooted in the body reality, has been taken away from you and suddenly you are looking at this boy – with a penis – and he’s a girl. So what is it that makes him a girl when he hasn’t got that other stuff that you’ve got? And therefore, if that makes him a girl, what makes me a girl? Well, I must have some of that stuff as well.

So, he almost becomes the ‘real’ girl, because he’s got some magical, indefinable, invisible quality that makes him a girl. What is it? And, so … if you redefine one person, you redefine every other human being around them. If you redefine one category, you automatically redefine the other. So these girls now must aspire to be a girl on his terms, he’s got the secret.

She goes on further to say, that further trauma is inflicted when puberty hits, as the transgirl then follows the masculine path of development. The disconnect between the reinforced belief of being a girl, is confronted with the reality of body development.

Social transition, practiced in this way, will most likely lead onto medical intervention, because instead of the trusted adults in this child’s life telling them they are wonderful just as they are, a boy who enjoys the company of girls, who enjoys his own choices in fashion, interests and exercise, they tell a comfortable lie, without regard for the impact on trust, the future of that child, or the redefinition of those protected categories of women, female and girl.

That bastion of medical publishers, the Lancet, have deliberately put out an issue of their publication recently with the single quote on the September cover: 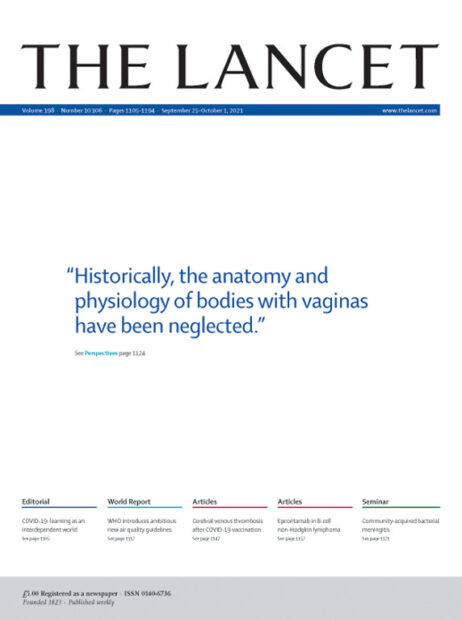 Now, in terms of medicine, women have known this and tried to raise this issue for years. Within a couple of years of this failure of being recognised by the medical establishment, women are now erased from the discussion, dismantled into – not even people – but bodies with vaginas.

Unfortunately, I can’t remember the source from another article I read, written by a transwoman, who found relief when discussing her life with another gender critical feminist. The question was asked – ‘Why do you want to erase your lived experience as a transwoman, by adopting the term woman, when my experience as a woman and yours as a transwoman are different and distinct from one another?’.

Her relief came, not from the question, but from the validation of the value of her personal experience as a transwoman. It needed no other validation but the truth.

When the expectation is given for me personally to say that “Transwomen are women”, I resist it for the following reasons:

I consider lying to be one of the most dismissive ways of treating people, and spend much of my time trying to improve my language and speech, so that I am practiced at truth-telling.

In this instance, I can understand why you want me to adopt these seemingly “innocuous” phrases. My understanding of your intent to avoid unnecessary distress in this way is clear.

But can you hear me? Do you understand why I think this is problem, and I am unable to adhere to your request?

So, where to from here?

What do you hear when someone says “Transwomen are not women?”