I’ve been checking out some of the amazing footage and photos from friends who were in the London ‘March for the Alternative’. 500,000 people turned out to show the depth of feeling against the slash and burn budget of the Conservative-Lib Dem government. As the Nats plan their own shock doctrine budget, I hope they’re taking notes.

As in New Zealand, a rightwing government is exploiting the UK’s economic woes to the advantage of the rich. The wealthy elite are getting to keep their tax loopholes while ordinary people face savage cuts to their social wage, and the cuts create a tide of new unemployed on top of already rampant joblessness.

I can’t recall a government that has lost popularity so quickly as the Lib/Cons. Check out the poll of polls, there’s barely any honeymoon period. 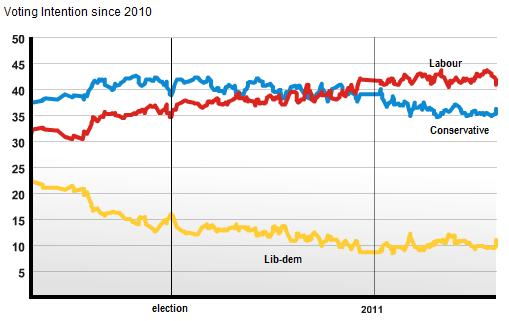 Of course, in New Zealand, the trend hasn’t been so marked, yet. But here, thanks to the excellent state of the government’s books when National took over, they were able to delay their black budget until this year, and gave out tax cuts for the rich on borrowed money in other years instead. And that trend is closing … albeit slowly.

On a side note, on Q+A yesterday Phil Goff responded to Paul Holmes’ inane ‘you’re languishing in the polls’ comment by pointing out that Labour is higher now than it was last election. The media have written Labour off but despite being fed that line constantly, the people of New Zealand have not, they are moving back to the Left, in spite of what the talking heads say.*

*And before the righties say anything, what do you think people will think about when they choose whether to vote for more Key or change? Some ex-MP or the failure of the government to deliver on any of its promises?

36 comments on “Half a million protest UK budget cuts ”