The complete mess that National has made of our health system got plenty of airtime during the election campaign. While it received less coverage, the education system is a mess too.

Nurses ask us to vote for our health

You could vote for three more years of “brighter future”. Or you could listen to the nurses.

Another postcard from the Brighter Future

In the midst of the cataclysmic big stories, we should not lose sight of the small personal ones. 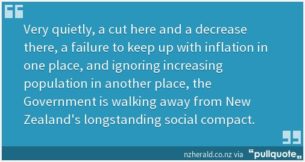 It’s a steady attrition, the death of a thousand cuts.

It’s not just lefties such as yours truly who think it’s mad to cut agricultural (especially emissions) research.

Cutting research into greenhouse gases? With our emissions profile? Now? This can’t possibly be mere stupidity. This must be willful blindness.

The Nats are going to miss the only target they ever cared about hitting – the mythical surplus. Seven wasted years and counting…

The Nats are steadily cutting funding (in real terms) to health (and other sectors). Today, yet another doctor broke. Welcome to the brighter future.

Pushed off the safety net

News from Australia reports an increase in numbers turning to sex work following cuts to welfare benefits. Here in NZ as a similar cost-saving measure we have benefit purges underway – at a time of rising unemployment…

So the plan to screw down police wages isn’t working, and National are having to keep going with their other approach.  But not everyone is taking death by 1000 cuts lying down.

Call off the education cuts

National has no choice but to call off the education cuts. The sooner they do it the sooner it will stop killing them in the court of public opinion.

Hidden away at the end of this story, hidden away out of most media view, hidden away from Housing New Zealand, and from society… ordinary people being shafted by National’s cuts.

Mfat is spending $9.2m a year on 30 strong razor gang cut diplomat jobs. It’s a ludicrous waste of money. As Goff notes – McCully’s splurging on ‘back office’ contractors in the razor gang to cut the ‘frontline’. 49 of 53 heads of mission have written to McCully say this process is destructive and dangerous. All McCully can do is blame the ‘star’ private sector head of Mfat he appointed.

Join the dots on universities

The government has been cutting funding to universities, and the effects are beginning to show.

I/S at NoRightTurn on the Gisborne mother and baby who were turned away by three government agencies when she sought help: “People who go to WINZ needing help should get it. Instead, this woman was told to fuck off, thanks to service cuts and a deliberate policy of limiting costs by imposing bureaucratic barriers to access.”

The Tertiary Education Union has revealed that 350 jobs are for the chop at Canterbury University – 18% of the workforce. The Uni, hardly reassuringly, says its 100 to 500. The Nats blame the quake. That’s rubbish. These kind of cuts will permanently gut the Uni, leaving it in no position to be part of the recovery. National: the anti-education government.

Good human interest story in the DomPost today about the human costs of public service jobs cuts. A Wellington woman has written a letter to Prime Minister John after her 63-year-old mother learned last week that her position at the Agriculture and Forestry Ministry is to be axed. Staffing cuts after a merger with the Fisheries […]

The quality of children’s ECE care clearly influences their later development, and therefore helps to shape their entire lives.  It’s probably the best investment any country can make, and the Nats are taking us backwards.

This is why we have employment law

New Zealand Defence Force staff are not covered by employment law.  Hundreds of them are being sacked, so as to get “more work out of fewer people”.  If they’re “lucky” some of those cast aside might get civilian versions of their old jobs back, with huge pay cuts as a sweetener.  Welcome to the epitome of National’s flexible labour market.

Squeezing the life out of the economy

Are we “roaring out of recession”?  No.  Is there an “aggressive recovery”?  No.  What’s going wrong?  The problem is that the Nats are squeezing the life out of the economy.

Unions and community groups don’t need to wait till after the Budget is read to know they’ve been screwed.  They’re gathering today at Parliament at 12pm for a protest rally – come along if you’re in town. I was talking to a union organiser today who said that one of her main worksites – politically apathetic most […]

Watch Jacinda Ardern clean up Jamie-Lee Ross on Breakfast this morning. Nearly half of the National Government’s much-quoted borrowing of $300 million a week is to pay for their tax cuts. That was this government’s choice. Now their choice is that everyone else has to pay for it.

The signs are clear that the Goverment is ploughing ahead with spending cuts and that Budget 2011 will contain yet more cuts to public services and still maintain tax cuts for the wealthy. On Budget Day, community groups, unions, and Kiwis who have just had enough will gather outside Parliament to protest.

A UMR poll shows that 40% of Kiwis support paying an earthquake levy to help pay for the Christchurch rebuild. 22% prefer more borrowing, and 29% want spending cuts. Asked just whether they supported or opposed a levy – 57% supported it. Yet the Nats are choosing cuts instead.

Key and English are trying to soften us up for big public service cuts this budget. They tell us it’ll just be ‘nice to haves’ and that the private sector will step in to fill the gap when they cut too close to the bone. The important thing to realise is that every time the public service doesn’t provide us with something either we have to buy it out of our own pockets (usually at greater cost) or we don’t get it at all.

I’ve been checking out some of the amazing footage and photos from friends who were in the London ‘March for the Alternative’. 500,000 people turned out to show the depth of feeling against the slash and burn budget of the Conservative-Lib Dem government. As the Nats plan their own shock doctrine budget, I hope they’re taking notes.