He Whakaputanga me te Tiriti – The Declaration and the Treaty 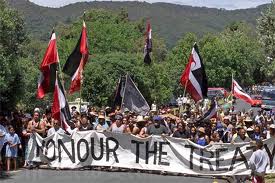 The Waitangi Tribunal has released a hugely important decision on the Treaty of Waitingi and the Government and others are already trying to downplay the significance of the decision.

The reasoning of the Tribunal is in my view faultless. At the time the Treaty was being negotiated the Northern tribes wanted to cede kawanatanga or governance to the English Crown. They never intended to cede tino rangatiratanga or sovereignty. The use of the different phrases was deliberate. And the Te Reo meaning of the treaty was clear yet the Crown used the ambiguity in the English version to suggest that Maori had willingly given away the sovereignty of Aotearoa.

We have concluded that in February 1840 the rangatira who signed te Tiriti did not cede their sovereignty . That is, they did not cede their authority to make and enforce law over their people or their territories . rather, they agreed to share power and authority with the Governor . They agreed to a relationship: one in which they and Hobson were to be equal – equal while having different roles and different spheres of influence . in essence, rangatira retained their authority over their hapū and territories, while Hobson was given authority to control Pākehā .

The rangatira also agreed to enter land transactions with the Crown . The Crown promised to investigate pre-treaty land transactions and to return any land that had been wrongly acquired . in our view that promise, too, was part of the agreement made in February 1840 . Further, as part of the treaty agreement, the rangatira may well have consented to the Crown protecting them from foreign threats and representing them in international affairs where necessary . if so, however, the intention of signatory rangatira was that Britain would protect their independence, not that they would relinquish their sovereignty .

The evidence is that this is the arrangement that Hobson explicitly put to rangatira – both through the Māori text and through his verbal explanations – and that they then assented to after receiving assurances in respect of their equality with the governor . Though Britain intended to obtain the sole right to make and enforce law over Māori as well as Pākehā, Hobson did not explain this . rather, in keeping with his instructions, he emphasised that Britain’s intention was to control Pākehā in order to protect Māori . The detail of how this relationship was to work in practice, especially where the Māori and Pākehā populations intermingled, remained to be negotiated over time . it is clear that at no stage, however, did rangatira who signed te Tiriti in February 1840 surrender ultimate authority to the British .

While some may see our conclusions as radical, they are not. In truth, our report represents continuity rather than dramatic change . Leading scholars – both Māori and Pākehā – have been expressing similar views for a generation or more . When all of the evidence is considered, including the texts as they were explained to rangatira, the debates at Waitangi and Mangungu, and the wider historical context, we cannot see how other conclusions can be reached.

The Herald wasted no time in publishing a contrary opinion by historian Paul Moon who claims that the tribunal got basic historical aspects wrong.

“I was shocked by some of the statements contained in the report. “This is not a concern about some trivial detail, but over the fundamental history of our country, which the tribunal has got manifestly wrong.

“In particular, the tribunal alleges that ‘Britain went into the Treaty negotiation intending to acquire sovereignty, and therefore the power to make and enforce law over both Maori and Pakeha’. This is simply not true,” says Professor Moon, “and there is an overwhelming body of evidence which proves precisely the opposite. I cannot understand how the tribunal got this so wrong.”

I would like to see the evidence Moon says there is because the wording in the English version states that the chiefs gave “to Her Majesty the Queen of England absolutely and without reservation all the rights and powers of Sovereignty which the said Confederation or Individual Chiefs respectively exercise or possess”.  It must have been the intent of the English to claim sovereignty over New Zealand.  Why else would the English version of the treaty contain this passage.

Of course this does not help the Crown.  There is a long standing and clear principle that where there are conflicting versions of a treaty the version using indigenous language is the preferred one.

Christopher Finlayson echoed Moon’s comments and said that the Crown still had sovereignty over New Zealand.  While in a legal sense that may be true the finding reinforces Maori’s historical view that the Treaty of Waitangi has been breached.  On Checkpoint he claimed that he had not had time to study the decision as it had only just been released but this is surprising given that it appears from a letter contained in the decision it was sent to Finlayson on October 14, 2014.  He also mentioned Moon’s comment that the decision was “rubbish”.

The decision will have special implications for the Nga Puhi settlement which is still being negotiated.  National’s desire to fast track the settlement may have been motivated in part by the likelihood that this decision would be against the Government.

The politics of this issue will be interesting and the Government’s response will be keenly analysed.  No doubt out in talkback land there will be many loud yet ill informed comments on how the decision could not possibly be correct.  But it reinforces a very clear historical reality that Maori have had their rights under the Treaty violated.