I’ve always thought one of the defining features of the Right is their views are based on assumptions and prejudices rather than on knowledge and facts. Today, Tau Henare is reported opposing Labour’s suggested policy of taking GST off fruit and vegetables. He said “If they can’t afford to buy a lettuce or a tomato then they should give up the drink and the smokes,” and “It’s a well-known fact that poor people, if they don’t have enough money, will buy smokes and not bread.”

Really? Well, it took two minutes checking on the Stats website to prove him wrong. (you might have hoped the journo who wrote the story, Matt Nippert, could have found the same info for his article too).

The Household Economic Survey collects spending and income data for households and divides them up by decile: 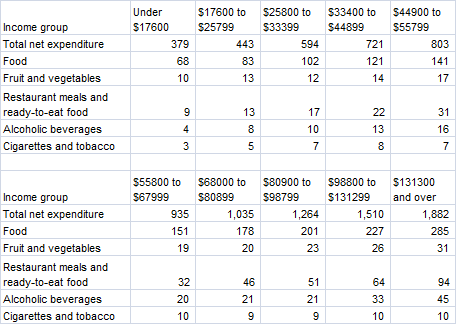 The first thing I hoped you noticed is that 50% of households have total incomes below $56,000 and only 20% have incomes over $100,000. But check it out, poor households spend less on alcohol and cigarettes than rich families do.

Check it out by percentage: 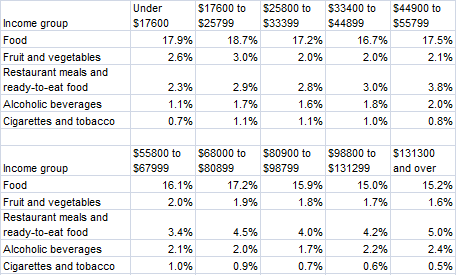 Do you think that information will affect the prejudices of Henare and his rightwing mates? Not a chance.