Hone stands by principles on foreshore

Stuff is reporting that Hone Harawira will not vote for the Nats’ foreshore and seabed legislation. And John Key is clearly upset. 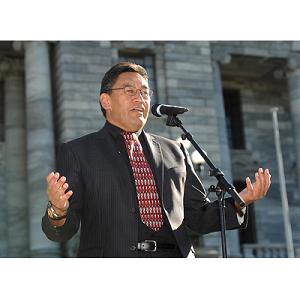 Mr Key said Maori party co-leader Tariana Turia told him this morning that “they’d lost one of the sheep in the flock.” It didn’t take long to guess it was Mr Harawira, he said.

The other four Maori MPs will support the Marine and Coastal Area Bill, which is due to have its first reading in Parliament this week.

“It’s highly predictable and quite frankly we would never be able to pass legislation that would satisfy Hone Harawira,” Mr Key said. “Nor should we, because that would not reflect the views of the majority of New Zealanders.

Sounds like someone needs the whambulance. Key’s just lost the ability to claim that he has genuinely circled the square, giving Pakeha and Maori both what they want. All he has really done is bought off the Maori Party leadership.

Good on Hone for standing up for his principles. The conceit that the Nats’ reimagining of labour’s law substantially changes things might be good enough for some but those who actually want change, rather than power for themselves, could never support it.

Looking more long-term and strategically, this sets up Harawira as the only Maori Party MP who can lead the party back to its left-wing values and credibly push for a better deal on the foreshore and seabed in the future.

52 comments on “Hone stands by principles on foreshore ”