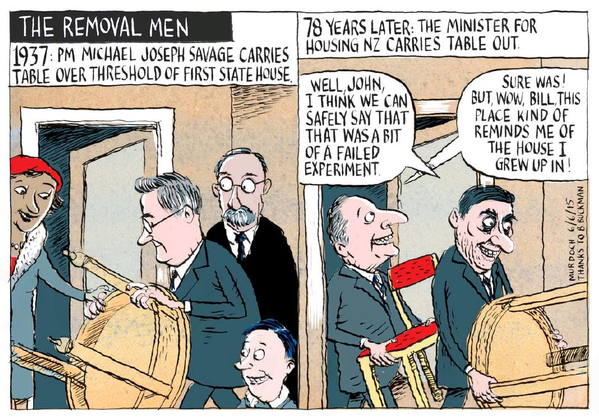 It appears clear that the Government has been gradually divesting itself of social housing at a time when need has increased dramatically.

Social agencies say a shortage of state houses in areas of most need is a crisis for low income families which the Government needs to deal with.

Figures released to ONE News show Housing New Zealand has fewer homes on its books now than it did five years ago.

The Salvation Army says low income families are living in substandard conditions because Housing NZ doesn’t have enough houses where there’s most need.

“The Government needs to have a long-term view that addresses the crisis that is now, but also looks to ensure that the crisis doesn’t continue into the future,” says Sue Hay of the Salvation Army.

But in a startling admission, Housing NZ says it has no idea how many homes are needed.

“In terms of the end number, we don’t as such. But we are looking to make sure that our portfolio’s fit for purpose,” says Leonie Freeman of Housing NZ.

Shades of the issues concerning child poverty.  If you do not know how bad the problem is you do not have to do anything about it.

Those 2,472 houses have allegedly been sold in areas where need is supposedly low.  But having relatively modest needs should not be something to celebrate or to stop trying.

Presuming the number of houses rented by the state remains the same at an average $230,000 a house this adds up to a tidy $561 million.  Coincidentally the amount to be paid in dividends both operating and the special capital contribution in the next financial year is $454 million.

If Housing Corp is right and the houses sold were superfluous to requirements then you have to wonder why other houses in areas of greater need were not purchased.

Clearly we are seeing the gradual privatisation of our social housing stock at a time when the need is greatest.  And the Government is not measuring actual need because that way it can say there is no problem.  And pocket the profits.