The US is embroiled in the most extraordinary of crises. Unique among nations, the US has a legal debt ceiling. This artifice has allowed the Republicans to create the current ‘crisis’. For 30 years, Republicans have cut taxes and upped (defence) spending. Strategic deficits that now allow them to force a crisis by refusing the raise the debt ceiling.

With a Democrat in the White House and half of the Republicans in the House backed by the Tea Party, this is the moment to strike.

The Republicans have chosen to present the Democrats with two impossible choices: cut government spending so hard and fast that it will send the economy into recession; or hit the debt ceiling, stop new borrowing and, so, default on the rollover of debt not to mention not have money to pay for services.

This is a purely political move. The Republicans want a) to shrink the government permanently and decisively and b) derail the economy to stop Obama getting re-elected.

With the numbers in the House rock-solid and the knowledge that the President will be the main target of blame, the Republicans are playing real hard ball. They have rejected an offer from Obama that would have brought in cuts and tax rises equivalent to more than 10% of federal spending – $4 trillion over 10 years.

Their current proposal: a in the debt ceiling of a trillion dollars which will be met with a matching spending cuts, no tax increases, over a decade.

This relatively small rise in the ceiling would only permit a few more months borrowing, because the government has to pay back hundreds of billions it has appropriated from government employees’ superannuation accounts since the debt ceiling was hit in May. This short-term reprieve is intended to force another crisis on Obama in election year and extract even bigger cuts.

Even more significantly,  the Republicans are proposing a ‘Super-Congress’ to force through spending cuts. A 12-member board – 6 from each House of Congress, 6 from each party – would have the power to re-write spending legislation, especially cuts to Medicare and Social Security, and these changes would then be slammed through Congress without the chance for members to amend the legislation. It’s undemocratic as hell. Incredibly, the Democrats are warm to this idea.

However, there’s still no certainty that this deal will be made. There is a real chance that the unthinkable will happen and the US will default on its debt.

It’s important to put this all in the context of the Republican plan, extending right back to Reagen, to weaken and shrink the government to the point where “it can be drowned in a bathtub”. It is all about reversing the advances of the 20th century.

There is no logic to it, other than preventing government from taking their money in tax to pay for these services. Ultimately, it’s not really even about the money, which the rich don’t need and don’t notice, it’s about protecting and asserting their privileges as the elite even if it hurts their country. 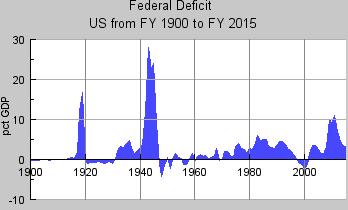 Reagen and his Republican successors cut taxes and increased military spending to falsely stimulate the economy in the short-term on a diet of debt. The deficit under Reagen rose to a % of GDP only previously seen during the World Wars. Bush Snr and Jnr continued to set the records. Only President Clinton ran surpluses. (there’s reflections of this in New Zealand too, where neoliberal governments have run ever larger deficits, while the fifth Labour government ran 9 years of surpluses).

This table shows that the main causes of the current deficit, against the surpluses projected when Bush Jnr came to power, are tax cuts: The long-term consequences of 30 years of tax cuts and defence spending, and the interest on all that debt, are the inability to pay for core government services – pensions and healthcare: 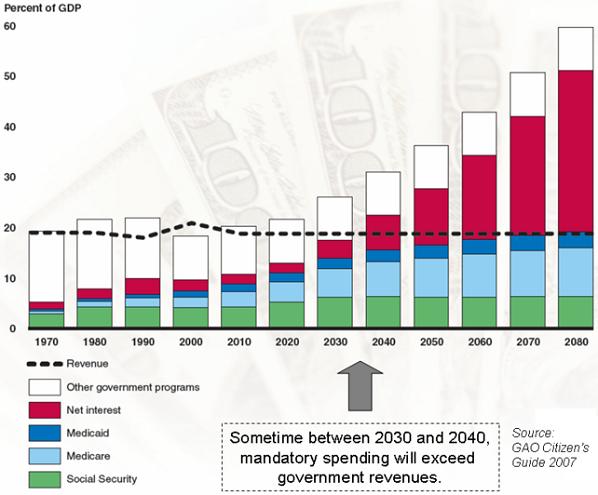 This is what happens at the end of empires. The interests of the elite become completely divorced from the interests of the ordinary people. Factions in the elite fight intensely amongst themselves, rather than looking outwards to tackle their shared challenges. They create crises for petty political advantage, which ultimately weaken the empire and accelerate the fall.

The millionaires in Congress and the millionaires who back them feel no personal sake in the health of their economy and don’t feel the need to plan responsibly for the future. They do not think about the future of their country anymore, they think about how to win the next battle. How to hurt the other side, even if it means hurting the economy. Everything becomes just a political pawn, even defaulting on debt, even decimating the services that millions rely on when they are sick or out of work.