How low will Bridges go? 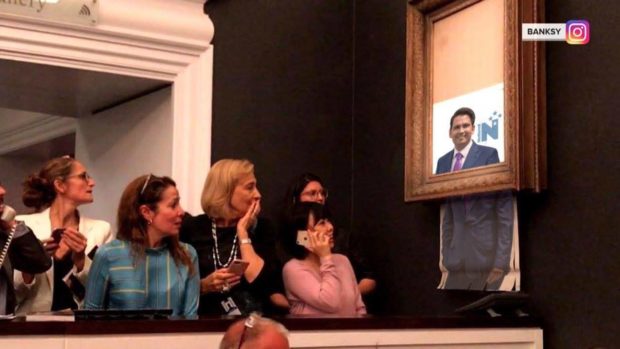 I seem to have spent much of the past couple of years writing posts about Simon Bridges.  It was not part of a campaign but the problem was Simon presented such an easy target.  Time and time again he did stupid things.  These were not run of the mill National levels of stupidity but often they descended into It really seemed like he wanted to

Simon Bridges has spent the past few days getting stuck into the fact there have been a couple of deaths at music festivals.  He has criticised the Government for passing legislation under urgency to bring in the ability to legally test pills at music festivals.  The service is offered overseas in various jurisdictions and has been instrumental in not only saving lives but in educating young people on the dangers of taking unlabeled drugs sold by small time drug dealers.

A year ago I said this:

Summer is the season for music festivals, and kids doing what they have done for ever, experimenting with stuff.

Occasionally the results are catastrophic as a young person gets their life traumatically shortened either through a drug overdose or because they have tried a dodgy batch of something.

This is why the topic of allowing participants to test what drug they have in their possession has been topical and is important.

In Europe the service is regularly available.  In Portugal for instance the decriminalisation of the personal use of drugs has meant that this can be treated purely as a health issue.

In Australia there has always been this hand wringing about the issue with critics saying that it will normalise and increase drug taking amongst the poor.  But sense has prevailed and the first festival testing service has been established.  And the test suggests that the service provides educational as well as safety benefits.

The last Government wanted to implement the policy.  But the handbrake was applied and implementation of the policy was stalled.

Fast forward to the new majority Labour Government and hey presto, legislation passed under urgency with the hope that pill testing could be implemented in time for the summer Festival season.

During the Parliamentary debate on the law change Simon Bridges showed some muddied thinking:

… there is clear evidence that use and harm will increase through pill testing. At the very least, I say it’s clear harm won’t reduce and there won’t be more people saved—that is, doing less harm.

He needs to make up his mind, will pill testing increase harm or not reduce harm.

He was also subject to this zinger by Chloe Swarbrick:

Chlöe Swarbrick: It’s because you stood in the way.

Bridges’ take away line?  The bill is part of a wider agenda by the Government to decriminalise illicit drugs.  There is no room for subtlety in Simon’s thinking.

It should be a no brainer.  The availability of testing is a reminder that drugs can be dangerous and rather than give a false sense of security testing can and will save lives.  And it will cause young people to reflect on the downside of drug taking.

Drug taking amongst young people is trending down.  Introduction of this law will not result in a rampant increase in drug taking by the young.

But National is gonna National.  Clearly they believe that they should never let a chance to engage in culture wars even if they are insulting dead kiwis and their families.

So what does Simon do over summer when he should be spending time with his kids?  He engages in a culture war battle, or as National describes it, is only asking questions. The clear implication was that the death was or could have been drug related.  Note the ratio.

In case we missed the subtlety of Bridges’ dog whistle that this was because the Government had stuffed up the implementation of the drug testing policy Bridges then tweeted this: 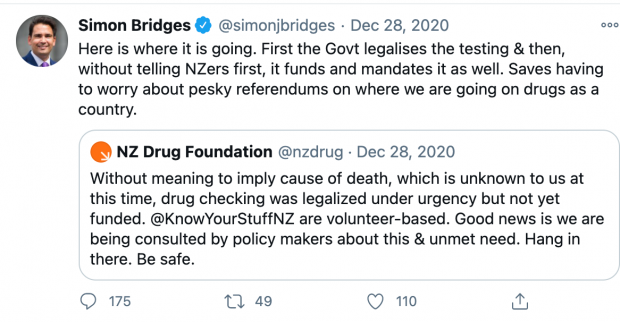 Then doubling down on what he previously said he chose to politicise a further death.  Again check the ratios.

From what I can tell there have been three deaths associated with music festivals.  I am not going to mention names.  Their families ought to be allowed to grieve in private.

The first was a soldier who died at the Hidden Valley Festival after suffering what is described as a medical event.  The second was a young Wellington student who left the Rhythm and Vines festival at 2 am in the morning and was found dead 8 kilometers away.  The third was a sound engineer who was working on the Rhythm and Vines festival and apparently suffered a heart attack.

There will be coroners’ inquiries.  But the last thing there should be is some sort of attempt by National to attack the Government over the ability of its policy to save all lives.

After all this method has been tried overseas with success.  December was the earliest that the Government could have passed the law given the dynamics of the last Government.  And sure the shortness of time and the lack of reagents meant that not as much testing as had been hoped for could occur but at least a start has been made.

Instead of criticising the Government National should be holding its head in shame.  It could have facilitated introduction of the the testing regime some time ago and, given Bridges’ logic, lives could have been saved.  But instead of this it went all culture war on it.  National MPs were not even present at Parliament’s Health Committee when Chloe Swarbrick presented a petition over a year ago seeking implementation of the testing regime

I hope that this term Labour lines up policy after policy for Parliament to consider and for National to oppose, thinking that the grand old days of the 1950s and 1960s may return and see it returned as rightful leader.  Because all that this will show is how shallow National’s thinking on important issues is, and how it is prepared to play petty politics when situations arise that demand the most careful and humane methods of treatment.