Last week Treasury came out with a detailed and interesting report, Inequality in New Zealand 1983/84 to 2013/14. The web page is here, and the full document (pdf) here. From the summary:

The results indicate an increase in the inequality of market and disposable income per adult equivalent person (using the individual as the unit of analysis) from the late 1980s to the early 1990s. Subsequently, inequality has – with some variability – remained either constant or has fallen slightly.

It wasn’t widely reported. What coverage there was repeated the message of the The New Zealand institute, that inequality is supposedly not rising.

Dig beneath the surface however. Figure 4 in the report is really interesting and useful, plotting three Gini measures (market income inequality, disposable income inequality, and consumption inequality) over time, with significant events indicated: 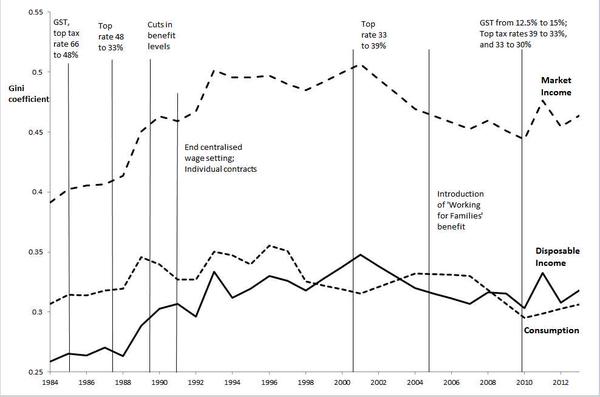 As we all know inequality increased sharply with the neoliberal reforms of the late 80’s – early 90’s. From the report:

It appears that the 1980s reforms – involving cuts in the top income tax rate along with benefit cuts and the ending of centralised wage setting [i.e. the ECA] – are associated with increasing inequality.

The measures level out (damage done) during the late 90’s. They begin to fall with Labour’s increase to the top tax rate in 2001, and Working for Families in 2004. The momentum of this fall continues until 2010, when there is another sharp upturn in inequality following National’s reduction of the top rate and increase in GST.

In short, the last Labour government acted to reduce inequality, the current National government has acted to increase it. Because of the slow (but cumulative) nature of such changes, it is almost certain that the full effect of National’s changes have not yet been measured.

The Treasury report is a useful contribution to the record on inequality in NZ. It should be read in conjunction with these CTU reports (here, here), and the OECD report on just how damaging inequality has been for NZ (in short NZ and Mexico are the worst affected in the OECD with significantly reduced economic growth due to inequality).

Just as a reminder of what the current levels of inequality mean for NZ, see this excellent graphic by Pencilsword, the Wealth Gap Tower, and the discussion that followed here on The Standard.