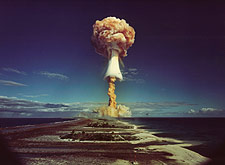 Twenty years ago this year, the fourth Labour government passed legislation that made New Zealand nuclear free. At the time, the legislation was controversial and was opposed by National. Jim Bolger ever called it “an exercise in futility”.

In the intervening years, parties opposed to the legislation have tried to change it. Only two years ago we had Don Brash telling the US that under his leadership it would be “gone by lunchtime”. Once outed, he tried to shut down the issue by claiming that he’d seek a referendum. Later still, he made noises about not requireing a referendum if National secured an implied mandate by winning the election. His flip-flopping was damaging to him and damaging to National.

John Key is smarter than this. Just last Thursday on the Farming Show he said:

Key: “We’ve made it clear we’re going to stick with the anti-nuclear legislation. I think that’s the right call it, it’s more iconic and symbolic than anything else practically.”

Presenter: “No, no John can I correct you there. It’s more populist than anything else, be honest.”

Key: “Yeah well I think it’s, I think it’s one of those things where it’s, yeah there is a kind of a strong feeling around the country… I think in a safety sense cause no issues but that’s not the point from New Zealanders’ point of view.”

Does the difference even matter?

4 comments on “Inoculation, part one ”