Introductory ramble to save you Googling me 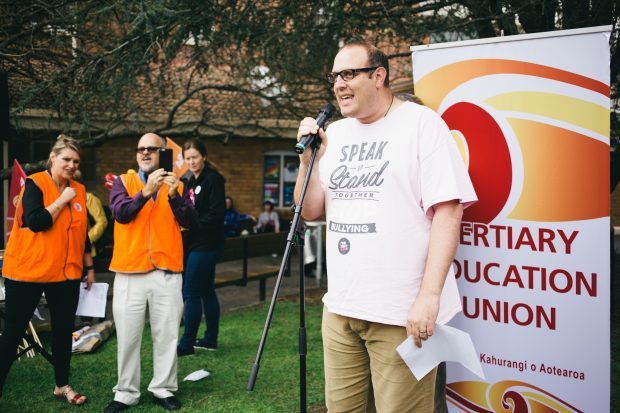 I’m Enzo (yes that’s my real name) and I write for The Standard now.

Just thought I should introduce myself and tell you a little bit about my background – so hopefully it doesn’t become A THING.

No, I have not defended war criminals in Rwanda, secretly taped staff members in an electorate office, claimed a benefit I’m not entitled to, given a speech anywhere near Orewa, nor had dinner with anyone from Oravida.

It’s worse than any of that.

I work for a union. GASP!

In fact, (I might as well rip the whole band aid off in one go) I have been working for unions for almost thirteen years – first for the EPMU and, since 2010, for the Tertiary Education Union. Sorry not sorry.

Needless to say, any opinions I will express here are not necessarily those of my employer. Sometimes they might be and other times they may not. But most of the time that will be irrelevant because, partly to be on the safe side and partly because I don’t really want to think too much about work in my spare time, I won’t be writing about tertiary education or industrial relations on this site.

Long before I started working for unions I was a Labour Party activist. I joined Labour in 1998 in the Northcote electorate, where I campaigned for Ann Hartley. Then in around 2006 my wife and I purchased a house in West Auckland, where I volunteered for Lynne Pillay and was campaign manager for Carmel Sepuloni in THAT electorate contest that we lost by nine votes after a judicial recount. Bummer.

I also had a three year stint as Auckland/Northland Regional Chair in there somewhere too.

I describe my politics as social democratic and socially liberal.

I voted for David Cunliffe and Andrew Little in the two leadership elections that members got a vote in – and you can feel free to remind me of that if I ever start taking myself too seriously around here.

After a bit of a break from Labour in recent times, I’m easing myself back in a little bit while trying not to get sucked too far back into the machine – I’ve done my share of doorknocking, phoning, leafleting and the like, and that of one or two others as well, for the time being.

But maybe instead of those things I can make a contribution here – pontificating about the world from a lefty perspective. The proof of that will be in the tasting of course.

Aside from politics, I have an unhealthy obsession with football and a little organisation called A.S. Roma. I have a football blog that I have been building up over the past few years – to the point where I was named ‘Community/Internet Writer of the Year’ in last year’s New Zealand Football Media Awards.

ITBOTN will remain my number one focus so I may not be as prolific on here as some others but I will chip in when I feel I can add something useful.

Apart from that, my other interests include letting MickySavage beat me at golf on a semi-regular basis and walking in the Waitakere Ranges (while we still can).

Now you know everything you need to know – I think.

You’ll hear more from me soon.

24 comments on “Introductory ramble to save you Googling me ”