Harry Leslie Smith, the conscience of modern Britain, is seriously ill in a Canadian hospital. Harry was visiting his son Canadian resident son John, who has been by his father’s side since the 95 year took ill.

John has been regularly updating Harry’s twitter feed and the response from around the world has been an incredible outpouring of love.

Harry’s speech in support of the NHS to the 2014 UK Labour Party conference , is one of the greatest pieces of heartfelt oratory in British political history. Not a dry eye in the house.

Harry has gone on to write many books, give many more speeches and to become an unlikely twitter star. Not for fame, not for money. For the people.

” I can assure you I am not ready to die because I have too much work to do.” 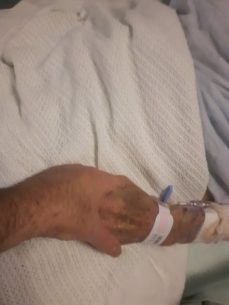 I stand with Harry because Harry stands with all of us.