It ain’t over ’til it’s over

The economists think the recession is probably over (for now). If you’re one of the lucky ones, you may very well be thinking ‘well that wasn’t so bad’ but what does the end of the recession mean? All it means is that the economy is has stopped shrinking.

Now, say you and me were out climbing a mountain and you slipped and slid some way down the hill. Me calling out ‘hey! you’ve stopped falling’ isn’t going to be very comforting, but the point where you stop falling is the end of the recession in an economist’s eyes. You’re not going to feel like you’ve recovered what you lost in the slide until you’re back at least as high as when you started falling.

So, how long until New Zealand will be back where it started before the recession? 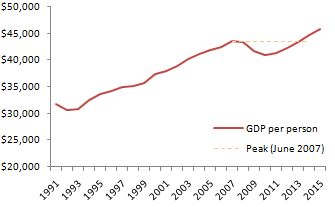 It will be 2014, seven years, until we get back to the GDP per person of $43,400 that the economy peaked at in 2007. And there was too much poverty (and too much middle class moaning) even at that level.

Now, that’s assuming everything goes according to Treasury’s projections. Another oil spike, a drought or a burst housing bubble and we’ll be slipping down the slope again.

All the more reason for the Government to get its policy settings right by helping break our addiction to oil, reducing our carbon emissions to aid in the struggle against climate change, and discouraging over-investment in housing while providing the right kind of stimulus to create jobs and sustainable wealth.