Judge scammed by a legal idiot and his pet pest

Thank the deity of your choice for that. Judge Harrison has found and courageously, in a timely manner, corrected his mistake. 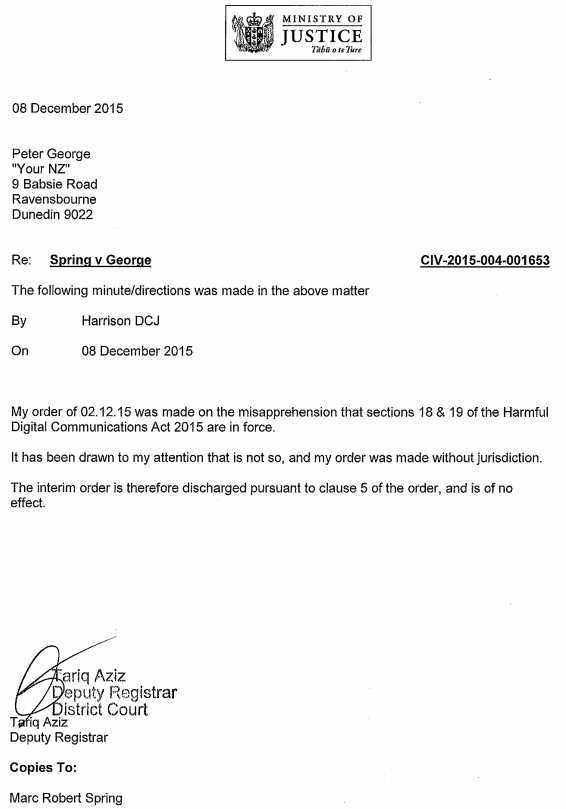 The problem for a judge being requested to give any injunctive order is that they only hear one side of the argument – that of the plaintiff. The judge only looks at the facts presented to them by the litigant and usually by way of their lawyer. Judges will use their own knowledge of the law, but this is brand new legislation that has been written in a rather convoluted and complicated fashion.

A judge looking at an application for an injunctive order relies on the obligation for ANY damages that the litigant undertakes when they seek an injunctive court order, and that their lawyer if they have one is a officer of the court and subject to some pretty severe sanctions in their professional life.

In this case it is now apparent that the facts being presented to him were completely false because Judge Harrison was led to believe by the author of the application that section 18 of Harmful Digital Communications Act 2015 was active.

I was up until 0330 last night trying to figure out what avenue there was that a district court judge could issue a interim court order against Pete George at YourNZ. There is a post now sitting on file that I stopped working on because I couldn’t figure a legal route between any application based on what has been alleged and a interim court order. I wrote this…

So in the unlikely event that Judge Harrison had made his decision under the HDCA, it is unlawful. But I doubt that he did. Unfortunately his decision gives no idea about what law he’d done it under, but it looks more likely that it was simply an interim court order based on the plaintiff saying that he was taking action under some other law. But what? I can’t see any that would fit!

I kept coming back to section 18 of the Harmful Digital Communications Act 2015. Which says :-

(1) A District Court may, if the court considers it is desirable to do so, grant any interim orders pending the determination of the application for orders under section 19.

(2) An interim order under this section may do anything that may be done by order under section 19 and expires when the application under that section is determined.

But that wasn’t a section that was in force, and won’t be until there is an Order in Council.

Even if it was in force, a district court judge could not use it on a proceeding brought by an individual if section 12(1) was in force:-

(1) An applicant referred to in section 11(1)(a), (b), or (c) may not apply for an order under section 18 or 19 in respect of a digital communication unless the Approved Agency has first received a complaint about the communication and had a reasonable opportunity to assess the complaint and decide what action (if any) to take.

Since no Approved Agency has been appointed by the Governor General, the following group of people wouldn’t be able to bring proceedings – section 11.

Who may bring proceedings

(1)Any of the following may apply to a District Court for an order under section 18 or 19:

(a)an individual (the affected individual) who alleges that he or she has suffered or will suffer harm as a result of a digital communication:

(b)a parent or guardian on behalf of the affected individual: 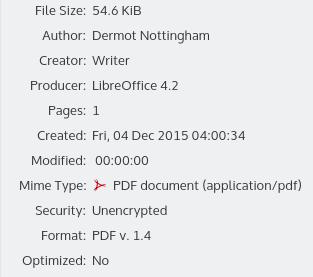 The tags on the “press release” by Marc Spring. Note the author and the time that the PDF was made.

Quite simply Marc Spring, the plaintiff and internet pest shouldn’t have been able to apply for an interim court order. There is meant to be an agency knowledgeable in the way the internet operates1 filtering out whining nutters like Marc Spring and his advocate mate Dermot Nottingham from pestering online media without good reason.  Dermot Nottingham is well known2 as an “associate” and “advocate”  – but generally I just view him as a ignorant nutter.

I’m afraid that Judge Harrison was deliberately suckered by a application that would have been long on bullshit, very weak on legal understanding, and full of outright lying. Just like all of Dermot Nottingham’s documents presented to legal bodies that I have seen have been in the past3.

I suspect and hope that Dermot Nottingham wrote both the press release and  the application that the judge relied upon. Certainly the digital tags in the press release PDF point to him acting for or being an “associate” of Marc Spring.  And I will have fun investigating this, because the Lawyers and Conveyancers Act 2006 has some interesting things to say about people who do reserved areas of work on behalf of other people.

I hope that Pete George seizes this opportunity to deal with them for the harm they have done to him and his reputation over recent days. Hopefully Judge Harrison will find a good use for his skills as well.

I hope that people in the legal profession have a close look at how completely destructive the HDCA is going to be. I also wrote this last night about one aspect of the decision.

Huh? I have no idea what a “full-time moderation” system is. Technically (as a programmer) they simply don’t exist. I don’t know of any organistaion exposed to the net outside of something like the NSA or DOD who are likely to have one.

Moderation systems are all human batch systems of one form or another. The ones that require the release of all comments are usually worse that ones that allow comments and then correct obnoxious behaviour. Simply swallowing offending comments without explanation doesn’t allow the culture of setting the expectations of social behaviour. In societal terms it is roughly the equivalent of bringing up children without providing any feedback about bad behaviour apart from a headman’s axe.

The social media systems that work operate exactly like a police and court system with a mixture of semi-automated and human systems. Police don’t even attempt to do full-time “moderation” of our culture – they just deal with the exceptions who operate outside the local rules. Moderation systems that are effective do exactly the same. That is why this site handles hundreds and often thousands of comments a day

Not to mention that clearing batches of 50-100 comments  at a time is a complete bore and you’d have to pay monkeys to be bothered to do it badly – which is what you see with the moderation on sites like NZ Herald. A dead and rather boring forum with no real dialogue.

To require any kind of  “full-time” moderation will require almost every social media site to shut down, especially those like facebook (no fulltime moderation), twitter (definitely no moderation), and probably all NZ blogs apart from No Right Turn (who doesn’t allow any comments). I can’t see how forcing that via the courts could be legal under the HDCA or any other act could be legal.

I see that David Farrar makes the same point.

But most of all, I hope that the judges, registrars, and their clerks take notice of why you don’t trust anything that has been near Dermot Nottingham or his associates.