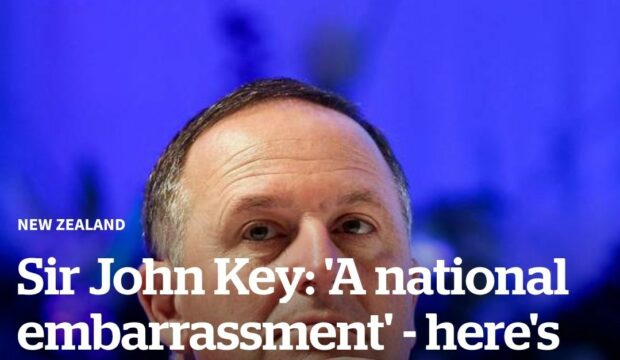 What a way to wake up in the morning.  We lost an hour because of daylight saving and by the looks of things we also lost four years, because John Key’s reckons were being broadcast in stereo in both the Herald and in Stuff.

It was classic Key.  His opinion piece amplified the absolute certainty in the accuracy he has of his reckons that can only be formed by being educated in a private school, being a member of the National Party and a merchant banker and working at Merrill Lynch.

And what were these reckons you may ask.  Essentially that we should be more like Apollo 13 in our response to Covid.  Yep we should have jammed everything together with whatever we could get our hands on, make really quick decisions based on limited information and hope.

And we are living in a smug hermit kingdom.  Yep Key has not lost his ability to invent really annoying and highly inaccurate rhetorical flourishes.

He thinks that we need to “get back to a life where New Zealanders can travel overseas – for any reason – knowing they can return home when they want to, and where we again welcome visitors to this country.”  It is all about the international travel with Key.

And rather than keeping us safe in a way that no other western country has been able to manage Key thinks that our public health experts have “done a good job of making the public fearful, and therefore willing to accept multiple restrictions on their civil liberties which are disproportionate to the risk of them contracting Covid”.  Clearly we should have put up with those tens of thousands of deaths and crippled health system just so Key could visit Hawaii.

He describes the MIQ system as a “lottery” and a “public embarrassment” and decries Kiwis no longer able to return home.

He also sides with business owners who are worried about their future.  I don’t dispute that some businesses are doing it tough but there is compelling evidence that New Zealand’s short sharp lockdowns and for elimination are better for the economy than more permissive alternatives.

#ZeroCovid is a cost-effective economic investment : In the 2nd quarter of 2021, the GDP of the Zero Covid countries grew compared to the 4th quarter of 2019 (+1.7%). In the G10 countries that did not eradicate the virus, decline remained significant (-1%). [3/7]⤵️ pic.twitter.com/uArhsOXhv9

Key is copying the Chris Bishop approach to Covid, propose something that is already being developed and then try and claim credit when it happens.  Of his proposals:

Why Key chose now to go public is interesting.  Yesterday Judith Collins said National had Covid policy almost ready to go and that it was now being peer reviewed.  What is the bet the policy is similar to what Key has set out?  And I wonder why he felt the urge to undermine the announcement by releasing his opinion piece now?

The overwhelming two emotions that I felt were firstly annoyance and a feel of deja vu at the closed minded simplistic uber confident rantings of a merchant banker.  And secondly a sense of relief that Jacinda Ardern and not John Key led the country during this global pandemic that has brought pretty well every western nation except New Zealand to their knees.