Analysis by Rhema Vaithianathan, which hasn’t itself been critiqued but has seen her subjected to the typical vicious personal attacks from National, shows that the supercity will have big economic costs for the areas of most of the existing councils:

Hmm. Funny that Hide forgot to mention that when he said the cost of the supercity would be â€˜miniscule’ perhaps he didn’t know. Perhaps, as seems to be a recurrent theme of this government, they hadn’t done the cost/benefit analysis.

There’s another set of costs that Key and Hide have kept quiet about.

At the moment the different councils in the Auckland region have different levels of debt. Fair enough, the people elected their own councils. They got to choose what councils they wanted with which policies and the debt levels that came with them.

If Key and Hide force this supercity on Aucklanders they will also combine all the councils’ debts into one. For most people (870,000) the per capita debt of their council will increase, for the other 498,000 it will drop. 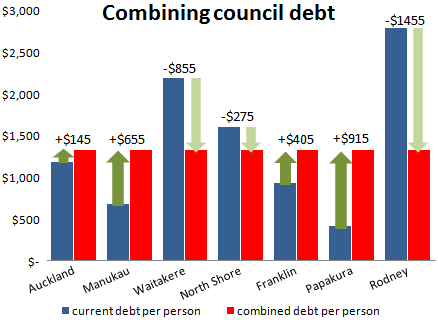 People from Manukau, Auckland City, Franklin, and Papakura will suddenly find themselves paying more in rates to pay off debts that were accrued by the people of Rodney, Waitakere, and North Shore.

Nearly 900,000 people will suddenly be loaded with paying off debts from councils they didn’t vote for in a supercity they don’t want. What’s democratic about that?
-Marty G

18 comments on “Key’s surprise for Aucklanders ”