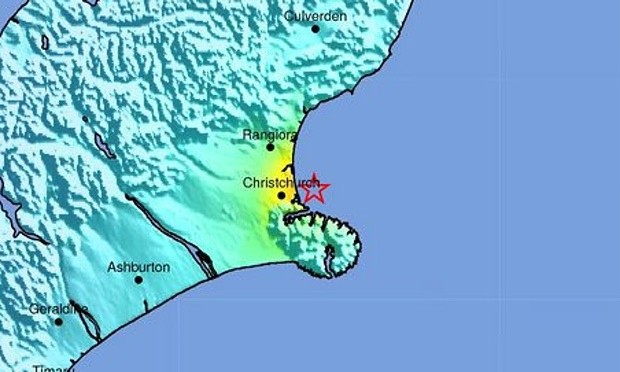 It must feel like a bad dream to our Cantabrian brothers and sisters.  A magnitude 5.7 earthquake hit Christchurch this afternoon.  Thankfully there are no reports of deaths or serious injuries.  But there has to be psychological effects.

Christchurch City Council is receiving reports of damage throughout the city following the 5.7 earthquake which struck at 1.13pm.

Cliffs have collapsed at Whitewash Heads, Sumner, and also on Wakefield Avenue, where the cliff has collapsed on the eastern side of Richmond Hill.

Christchurch Mayor Lianne Dalziel said that burst watermains are also causing problems in some areas of the city. Teams are currently out checking the situation. Mains have burst in Office Road, on the corner of Shirley and Alfred streets, Hurst Place, Hargood Street, Courtfield Close, Hills Road, Bower Avenue, and Marriots Road.

Valves at the city’s reservoirs automatically closed and crews are on site manually resetting them. There are also some pump stations affected by power outages and City Care is organising stand-by generators.

In addition, there appears to be general traffic congestion as people attempt to get home. Some traffic signals were affected, but these have now been restored. The worst affected areas for congestion are Marshland Road and Sumner.

The Lyttelton Road Tunnel is open, however there is concern about Anzac Bridge, Fitzgerald Twin Bridges and Gladstone Quay and all are being checked.

The Council’s facilities including libraries closed briefly some will remain closed until an assessment has been completed, so there may be a delay in them opening.

The Council is also receiving a number of calls about missing animals and Animal Control staff are now assisting to resolve this.