Kiwi jester to play for Queen 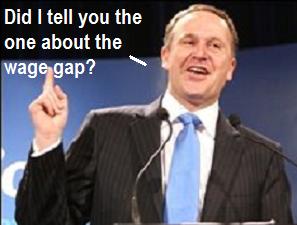 Self-styled ‘Jokemeister-in-chief’ John Key has been selected from a host of eager clowns, buffoons, and slapstick artists (known as the National Party) to perform for Queen Elizabeth the Second for a weekend next month.

A clearly excited Key announced his selection. “This is the ultimate in a long journey for me. Lately, I’ve been expanding my comic range into working on my magic tricks and gags. There’s my ‘$50 million fortune out of thin air’ routine, which still gets laughs even when the audience realises I’ve taken it out of their own pockets, and my latest trick where I substitute the Prime Minister of New Zealand for a short bald failed dancer without anyone noticing.

The Queen admitted she has been following Key’s work for some time:

“He’s a comic genius. Yes, he does all the classics: the pratfall off the stage; the awkward, overawed country bumpkin on the Letterman stage; the odd vasectomy joke; the grammar mistake in the education billboard; the self-deifying DVD that uses stolen music and gets withdrawn….

But it’s his straight man stuff I really like. He’ll seem like he’s being dead serious but if you get the inside jokes, he’s a real riot. Take the Jobs Summit. Oh my, one nearly wet oneself when he announced the ‘national cycleway’. How he keeps a straight face while insisting that it’s still going to be a success, I don’t know. This is a man who can tell you that he is managing a strong recovery when 100,000 more people are unemployed than when he took office, and he doesn’t even have to stifle a smirk!

Perhaps his best joke is his longest running: he tells a journalist that he wants wages to drop, then insists he didn’t say it or he was talking about Australian wages, then he enacts policies that make wages drop and they do drop, and he insists they’re going up! He’s been running that gag out for two years now and it just gets funnier”

Key is keeping mum about what material he plans to use for his performance but The Standard understands he will use well-loved older material like “have I got a brighter future for you?!” and a try out a new duo piece with Phil Goff, where each says essentially the same thing and competes to have the most appealing grin, called ‘Election 2011’.

Asked if he has any nerves ahead of the big show, Key whipped out his old catchphrase saying “nah, I’m pretty relaxed”.

15 comments on “Kiwi jester to play for Queen ”