Good work by Geoff Simmons at the Morgan Foundation:

In a speech on Friday, Prime Minister John Key claimed that under National, twice as many new houses were being built as under Labour. Steven Joyce followed that up by stating “Auckland’s housing problems are a regulatory issue, primarily, and [the result of] a long period of under investment in housing which was caused by a strangling of red tape.”

Are they right? Only if you are prepared to contort the statistics in the most favourable way possible.

Key’s spin is to compare the lowest point possible under Labour – as the GFC was kicking in, to the highest under National. If you compare averages:

In fact, under Labour around 600 more houses were built per quarter than under National’s term thus far. That was about housing consents. What about state houses? This graph was going the rounds on Twitter a while back. Labour builds the houses. 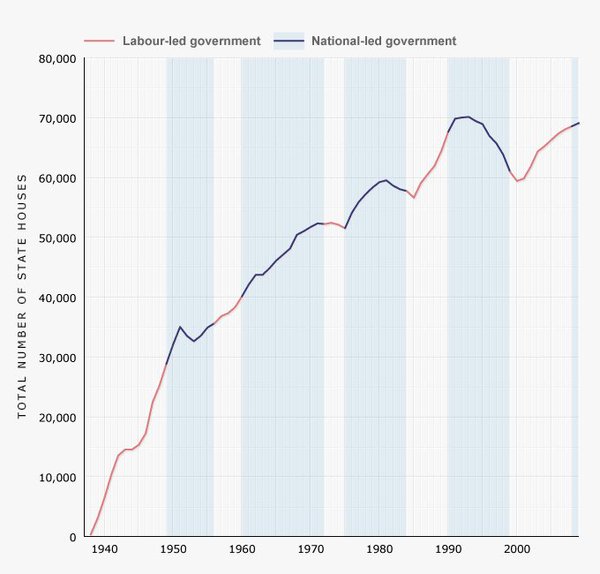 Morgan Foundation fact-check of the govt's housing bullshit: https://t.co/jXUXqDTnlw tl;dr, it's a fact that it's bullshit

Fact checking by the Morgan Foundation. Seems the Nats may just not be very good at housing. https://t.co/y14yOM2a3Q pic.twitter.com/KjhgzAlgJA

19 comments on “Labour builds the houses (yet another Key lie) ”