As widely reported this morning, Labour and the Greens have set out an agreed fiscal framework. Here’s the Labour press release:

Labour and Greens commit to rules for responsible financial management

The Labour Party and the Green Party have agreed to Budget Responsibility Rules, which will provide the foundation for sound fiscal management after the election.

“New Zealanders rightly demand of their government that they carefully and effectively manage public finances. We understand that and are committed to delivering this,” says Labour Finance Spokesperson Grant Robertson.

“These rules demonstrate how Labour and the Greens in Government will manage the economy prudently, effectively and sustainably.”

Under the Budget Responsibility Rules the Government will:
• Deliver a sustainable operating surplus across an economic cycle
• Reduce the level of Net Core Crown Debt to 20 per cent of GDP within five years of taking office
• Prioritise investments to address the long-term financial and sustainability challenges facing New Zealand
• Maintain its expenditure to within the recent historical range of spending to GDP ratio
• Ensure a progressive taxation system that is fair, balanced, and promotes the long-term sustainability and productivity of the economy.

The Government will establish an independent body to make sure the rules are being adhered to.

“These rules are a clear and direct statement to New Zealanders that we will manage the economy carefully and be held to account. We will provide the Government that New Zealanders have been looking for: Responsible management of the economy and prepared to tackle the housing crisis and the growing problems in health and education,” says Mr Robertson.

Green Co-leader James Shaw says, “Sustainability is a stool with three legs – environmental, social and economic. Take one leg away and the stool falls over.

“In government, we’ll be a steady pair of hands. These are economic principles but we’ll measure our success by how many children we lift out of poverty, how many rivers we make clean enough to swim in, and how much progress we make towards a low carbon economy.

“The Greens and Labour are very much on the same page about this. This is what a stable, responsible, alternative government looks like,” says Mr Shaw.

Update: Liam Dann has a “big read” piece about the framework (it’s stupidly titled, but that might not be his fault).

I get pretty annoyed by the idea that fiscal responsibility is a centre right [thing].
James Shaw, Green Party 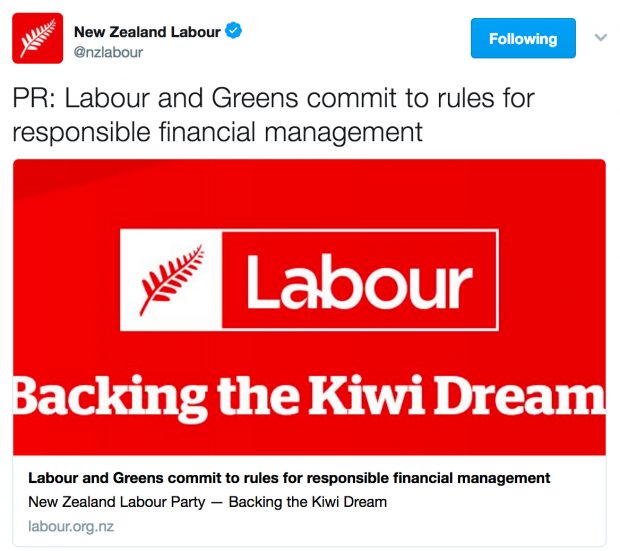 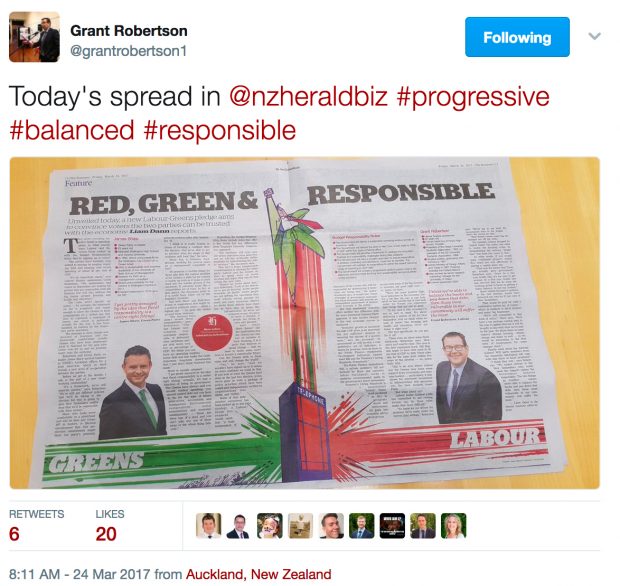