I remember just over a year ago, Helen Clark announcing that the number of people on the unemployment benefit had fallen below 18,000 for the first time in 30 years. The roomful of Labour supporters erupted into applause.

Contrary to the crap you hear from righties, Labour top priority is making sure everyone who wants one can get a decent job on decent pay. And they were amazingly successful in achieving it. There was palpable pride among the Labour supporters that, although it was far from perfect, under Labour unemployment had been kept below 4% for four years, the minimum wage had gone up every year under Labour, wages and conditions were so much better than a decade before, and so few people needed the safety net of the dole.

How quickly things change. Here’s dole numbers as they stand today and the (conservative) estimates from Paula Bennett (thanks Marty): 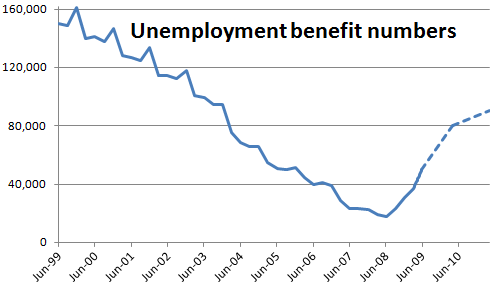