While Labour’s vote went down 138,000, the Greens gained 37,000 votes. Combined they lost 100,000 votes, whereas they would have gained 32,000 votes had the vote increased in line with the growing number of voters. Let’s look at where the votes were lost. 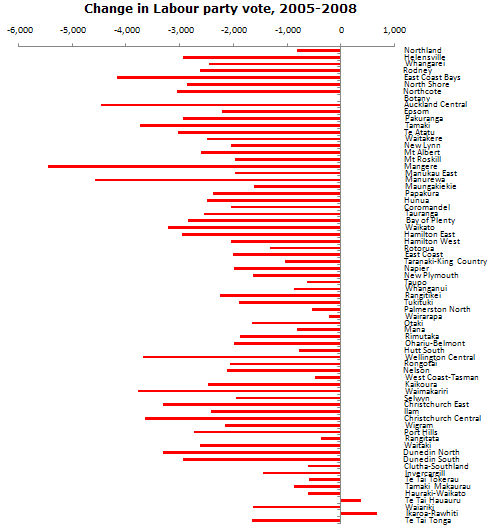 So, it’s a pretty consistent pattern across the country – Labour lost 500-2500 party votes in the vast majority of seats (the Left gained votes in only 7 seats). In general, the loss as heavier in the urban seats (but remember, Labour had more votes to lose in those seats). Labour lost 20-30% of its votes in the Auckland seats and Hamilton. The loss in Wellington, Christchurch, and Dunedin was smaller and more went to the Greens.

Votes for Labour in its South Auckland heartland fell more than average. The 14,000 votes lost there account for 10% of Labour’s lost votes in an area that accounts for only 7.5% of its nationwide vote. Turnout in South Auckland (by which I mean the four Ms) was down 10,000 from 2005 and 5000 more votes were lost to the Pacific Party. That’s not a vote for National or right-wing politics but it does seem to confirm that some South Auckland voters disaffected by Labour’s focus on liberal issues. (btw, this rubbish about an extra 100,000 votes being turned out in South Auckland in 2005 doesn’t add up – the increase in Labour votes in South Auckland from 2002 to 2005 was only 12,000, and total vote up only 20,000).

Auckland Central, another seat with previously strong support also experienced a big loss to National. Perhaps next time, Labour will put up a decent candidate who is willing to put the effort in to win. We can see the same pattern in other electorates where poor performing Labour MPs have seen what were once large majorities continue to erode or disappear altogether.

So, what does this tell us? Well, the success of the vacuous ‘time for a change’ slogan appears to have been widespread. The situation, particularly, in South Auckland ought to improve as feelings over the s59 issue will, especially if Labour moves back to its roots in work rights and public services. The importance of committed, strong candidates cannot be over-estimated. One bright side of the losses and change of leadership will be that a new crop will get a look in – as with National in 2002, the deadwood has been stripped.