Let he who is without sin….

The Parliamentary exchange relating to the magazine ad is here:

Hon Annette King: Can he remember advertising in the Grey Power magazine recently, stating “We’re working for you. Security. Well-being. Respect.”; if so, does that respect include listening to, and acting on, the advice of those older people who are saying that selling the State assets they paid for is totally unacceptable?

Hon BILL ENGLISH: I do recall some ads in the Grey Power magazine, including one on asset sales, that did not carry an authorisation statement. I think that will be among the material referred to the police, with the Labour Party yet again in trouble for breaking the electoral law.

Hon Annette King: I seek leave to table an advertisement from the National Party in the Grey Power magazine that solicits votes and is unauthorised.

But the Jackel’s compliant is potentially more serious. I’m not so worried about the use of the electoral roll for segmenting the population, but sending an electoral ad, masquerading as a personal letter from the PM, to every person over 65 in the country is a pretty big deal. It makes waving a few hundred stop signs seem like small beer. – Eddie 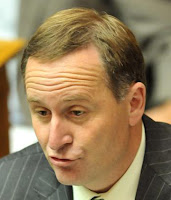 Recently I wrote about National being in breach of privacy laws and abusing Parliamentary Servicesconcerning them attaining the address details of pensioners, and targeting that group with electioneering material.John Key’s Communications Manager Willy Trolove pointed out that it was John Key himself who had sent the electioneering advertisement directly to pensioners, through Parliamentary Services, and not the National party.It’s a bit of a grey area, as the electioneering material contained a link to National’s website, promoted National’s policies and had their logo. I was happy that Willy Trolove made the distinction though, as it’s the facts that I’m interested in. Three week’s ago I again wrote to Willy Trolove:

“I’m specifically requesting information on how you were able to separate the pensioners details from the general public’s details as contained in the electoral roll?”

However the only answer I’ve received is that the pensioners details were obtained from the electoral roll, which does not answer my specific question. Willy Trolove is now ignoring my emails and requests for information. When Trolove was responding, he informed me that the letter:

“Has been approved for a parliamentary purpose in accordance with the Parliamentary Service Act. In compliance with that act, the content of the letter is neither electioneering nor campaign material.”

In my opinion, the material was electioneering and campaign material. I was concerned that the National party was abusing their position of power and unhappy that John Key had persuaded Parliamentary Services to disregarded procedure as clearly defined within various Parliamentary Acts.

It’s not acceptable to undertake such an electioneering advertisement at the expense of the taxpayer, when it’s strictly prohibited. So I wrote to the Electoral Commission to gain their opinion on the material in question. They responded:

“The Electoral Commission’s view is that the letter would appear to meet the test of being an “election advertisement” for the purpose of the Electoral Act.”

Therefore in the opinion of the Electoral Commission, John Key et al is in breach of the Electoral Act and therefore the Parliamentary Services Act, which has the same criteria set out to determine what is electioneering and/or campaign material.

John Key’s and National’s election advertisement was published within the regulated period, therefore the taxpayer should not fund it. I have requested that the Electoral Commission refer the matter of John Key and National’s abuse of Parliamentary Services to the Police.