Some of our friends on the Right have been putting themselves through strange mental contortions over the recent series of posts we’ve had on the impact of National and the Left on wages. To recap: we’ve shown that National let the minimum wage stagnate while inflation ate its buying power, the Labour-led Governments have increased it, we’ve shown that the income of the typical Kiwi (the median) went down under National once you adjust for inflation and has gone up significantly under the Left as a result of policy choices taken by the parties when in power. Further evidence for this is that Kiwis wages fell as a share of GDP under National and that share has increased under Labour. 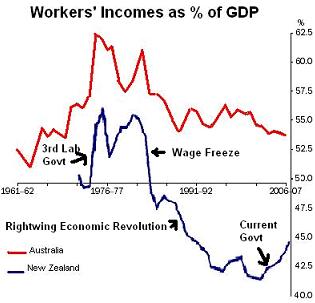 Now, thanks to Redlogix’s research, we can see that the shrinking slice of the cake that working Kiwis got under National and the increasing size of the slice since 1999 is not simply an international trend. Unlike Kiwi workers, Australian workers did not see their share diminish during the 1990s because they had a Labor Government and kept strong work rights laws. It was only when the Howard Government began to put in anti-work rights laws that the share began to fall. (sources: Aus, NZ)

Oh and if you’re worried about the wage gap between Australia and New Zealand – there’s your problem, Kiwi workers get a smaller share of GDP compared to their Aussie mates (see here for how the wage gap opened at the same time as the % of GDP gap). Who has the policies to increase Kiwis’ share and, so, close to wage gap? Who will keep on raising the minimum wage and strengthening work rights? Not National, the Left.

62 comments on “Lucky Aussies, they kept their work rights ”