Luxon has been Susied on National Radio 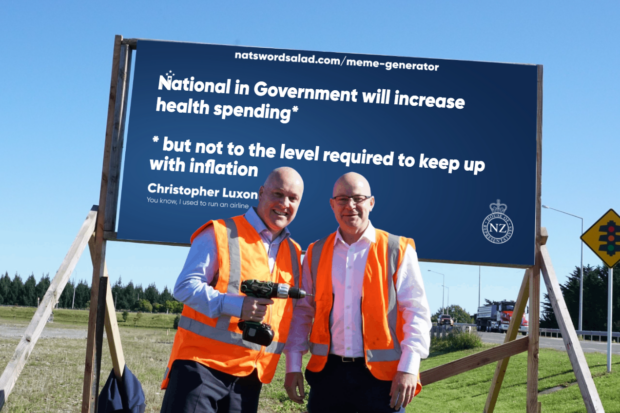 The country is in the middle of a wave of influenza that is putting significant strain on the health system.  And Covid has not gone away.  Numbers continue to be stubbornly high.

National are focussing their attacks on this.  Chris Luxon was interviewed this morning on Radio New Zealand by Susie Ferguson.  His solutions were neatly wrapped up in three bullet points, fast track nurses into residency, stop wasting money on the new Health bureaucracy,  and bring back health targets.

It is here that Luxon started to get unstuck.  He is very good at sounding all managerial on it but get him off his talking points and he flounders.

He claimed that a fast track to residency for nurses was more important than offering them good wages.  They will somehow bypass superior wage offers in Australia and Canada as long as they have certainty about their immigration status.  They are on the work to residency pathway which allows them to enter the country and after spending some time to then apply for residency.  But Luxon thinks it should be straight to residency.

It is here that the interview became interesting. Because Susie Ferguson started to ask him some very pointed questions.

SF – But also they [Australia and Canada] do pay them more, bottom line.  So are you saying that you wouldn’t be pay them anything more?

SF – Can we focus on the nurses please.  Would you pay them more money or would you not?  Simple question.

CL – We would stop spending the money building bureaucracy and management in Wellington.  We would put that money into the front line to make sure we improve services, hospitals, Doctors, Nurses, and we get them here.  But we are 4,000 nurses short right now and we could solve this by opening up our immigration settings, making New Zealand attractive to Australia, Canada and other places.

SF – … are you undertaking that if you become leader of the Government next year you will pay Nurses more?

Luxon continued to talk about anything but wage increases for nurses.  The collective sign you heard at this time was the whole country losing the will to live as they waited for Luxon to simply say “yes” or “no”.

He was then asked about tax cuts.

SF – But the thing about this here is that under your proposal thousands of top earners like yourself will get thousands and thousands of dollars as a tax cut so wouldn’t that then pay essentially a chunk of  nurses wages or to put a chunk more money into the health system.

CL – Susie what we are saying is that at the moment we have a Government that is making it up on the fly.  A week out from the budget they put a cost of living package together …

SF – Would you Mr Luxon want to commit to inflationary spending increases for the health system?

CL – Well what we are saying is we would be increasing health spend and education spend each year that I am in Government.

SF – To an inflationary level?  You would match that?

CL – We have been very clear we would increase the budget each and every year in health and education.

SF – Ah but that is not the same thing. Would you match inflation?

Luxon then talked about delivery implementation and execution.  He really loves his management buzz words.

The take away is clear.  In power National will allow health funding to dip below the rate of inflation just as it did last time it was in power.

This is why we had sewerage running down the wall in Middlemore Hospital.  It is why the health system needed dramatic and prolonged budget increases to get it functioning more efficiently.

As for the criticism of the new bureaucracy well it will be replacing 21 individual health boards.  I thought that National would approve of this.

It irritates me every time National attacks on health.  The system is large and complex.  To achieve meaningful change requires the application of extra resources over a long period of time.  It takes years to construct buildings and train staff.  Nothing happens over night.

And National’s proposal, to seek out “efficiencies” will only mean price cutting and further undermining of a system that is struggling but still works remarkably well.

Hats off to Susie Ferguson for actually asking the hard questions.  How can tax cuts be implemented but the quality of Government services not be affected.  To the rest of the media please take note.  The country deserves to hear from the major parties what they are proposing and not allow the reality of what they are suggesting to be smothered by corporate speak.

68 comments on “Luxon has been Susied on National Radio ”