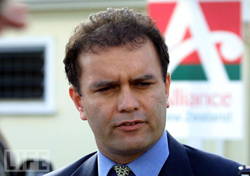 As foreshadowed by a comment here yesterday, Matt McCarten is chucking his hat into the ring for the Mana by-election.

This is a typically gutsy move by McCarten, who announced only recently that he has “the killing kind of cancer”. Facing such a struggle, some people might be looking to withdraw from the stresses of a public life. Clearly not Matt!

While I salute Matt’s endless courage and commitment, and would never question anyone’s right to stand, I do wonder at the political wisdom of this latest move. Matt isn’t going to win in Mana. Labour’s Kris Faa’foi is a strong candidate in a Labour seat. The Greens claim that their candidate Jan Logie is doing very well. A third candidate on the left simply isn’t going to find the space for a win.

What McCarten will do off course is further split the left vote. I don’t think it’s a serious problem, I don’t think he’s going to hand a win to the Nats Hekia Parata. My guess is that McCarten will split the Green vote, rather than seriously damaging Faa’foi. But this is certainly another wake up call and a reason for Labour to stay on top of their game in Mana. With John Key having learned the lessons of the Mt Albert fiasco, and now quietly campaigning hard in the electorate, nothing should be taken for granted.

The left needs another result like Mt Albert and the victory of the “Labour Mayor from South Auckland” Len Brown. Labour needs to keep it’s head in the game. Activists in Mana — with greetings and thanks to you all — get out there and give it all you have!…