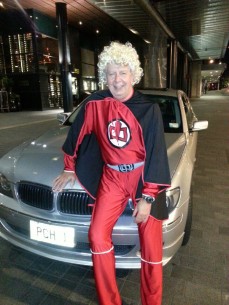 National MP Maurice Williamson was “so offensive” in his recent presentation at SkyCity, attendees walked out of the awards dinner where pictures of nearly-naked women were displayed and sex acts were referred to.

The high-profile backbencher and former minister was the MC at the Esri Users dinner last Tuesday, where the theme of the conference was superheroes and supervillains.

He displayed pictures of scantily-clad women, and ended his presentation with an audio clip that has offended many.

The fake advertisement features references to sex acts and could be seen as degrading to women.

Event organisers Eagle Technology had sent out an email that apologised for Williamson’s actions, and conveyed apologies on behalf of the Pakuranga MP.

But event-goers say that was not enough, and Williamson has been criticised for making degrading comments towards women at an event for an industry trying to attract more females.

Is the clip referred to this clip (warning NSFW or if you have any taste)?

A clearer case of misogyny is hard to imagine. Williamson is a disgrace and not deserving to be in Parliament.