Gerry Brownlee has been caught playing solitaire during Question Time in Parliament.

Were Etu union delegates threatened at a select committee?

National MP Parmjeet Parmar has been accused of threatening to tell the employers of submitters to a Select Committee what they had said in evidence if they did not withdraw their statements.

It looks like the National collective has doubts about Simon Bridges’ pulling power.

National MPs are refusing to own up to who used a sexist comment in Parliament against Jacinda Ardern.

Nick Smith has been caught out by Trevor Mallard telling a porkie in Parliament.

It’s pretty grim reading for the new Nat leader this morning. Pundits reckon he has no show in 2020.

The Sunday Star Times has reported that complaints were made before the last election about Chris Bishop’s Snapchat messaging to teenagers.

Sticking with Bill is the right move for National

National knows what to expect with Bill.

Another fine example of Bill English’s aspiration for young Kiwis

Apparently the government’s fees-free policy will “soak up staff out of McDonald’s”. Education instead of McJobs – Oh Noez!

Surprise surprise – Bill English is still whining that 44.4% should really be counted as 50.1% – and other snippets from Parliament’s post election conference.

No renewal for National

Bad luck you back benchers!

Right wing online forums are going to reach new levels of toxicity over the next 3 years. Someone really needs to monitor them.

What colour undies will Jordan wear?

Where to for National?

National need to apologise to the country for dirty politics and blatant lies. They need a huge clear out of dead wood, starting at the top. Then they need to try and figure out how MMP works.

Can we please stop pretending that ACT is a political party

ACT was a political party once, but it died a long time ago.

Gilbert calls out Nat “tribalists” who continued to back the lies

Outspoken sociologist Dr Jarrod Gilbert on the “tribalists” who continued to back the Nats despite their brazen lies – “if Labour had made the same accusation against National and not a single economist supported it, would you have reacted the same way? No. Of course not. And that’s what defines you as a moron.”

Nats and their proxies continue to try and drag the Greens into negotiations with National. They just can’t conceive of a party based on principle. A party that exists for something other than the pursuit of power for power’s sake. But I fear that the Greens might have a stern test coming up.

Peters has hardly cleared his throat yet and he’s already clearing out Nats and their proxies. Seymour, Eagleson, Carter – Peters won’t be stopping there. Bill English will agree to anything to cling to power. Peters is already enjoying humiliating him in public.

The missing story on Collins and the fuel pipe fiasco

Sure would be good if some other media called the Nats out on this too.

Proud of your legacy, National?

How National “delivers” for NZ 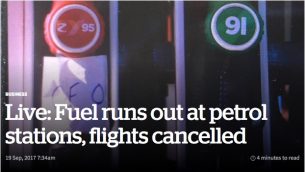 Seems Joyce doesn’t have the credibility to run another planned hit job. Labour insiders report debate and anger within a divided National party.

Who agrees with you Bill?

Last night Bill English emphatically defended and agreed with Steven Joyce’s lie about a “hole” in Labour’s budget – specifically the disproved figure of $11.7 billion. Jacinda Ardern took him apart with one simple question. English has nothing left now.

A test for NZ media and democracy

The Nats are not backing down from their $11.7bn lie. The media need to call it loudly for the big lie that it is. This is now a test for NZ’s democracy.

National have poisoned the Peters well

National deciding to go after Winston Peters was a high risk strategy, and it has backfired on them. Caught between their own dirty history and a resurgent Labour.

The best debate zinger didn’t come from anyone on the stage.