Comments get automatically closed on posts older than 30 days, unless that the post remains quite active. It displays like

The main reason for this update is because a common troll tactic recently has been to drop comments into very old posts. It does no real harm.  But it does increase site traffic and is annoying for the moderators because the comments are usually out of context with other dialogue going on. It will also prevent some confusion over posts where people have found them using google, and thought they were current.

The other update is to put a experimental TinyMCE comment editor on the site. This can currently only be accessed by people who have registered and are logged in and have that grey mantle of authority. Users can turn it off in their profile if it causes problems. At present I have no plans to extend its use to people who aren’t logged in because they can’t turn it off if it causes problems with their browser configuration. It looks like this. 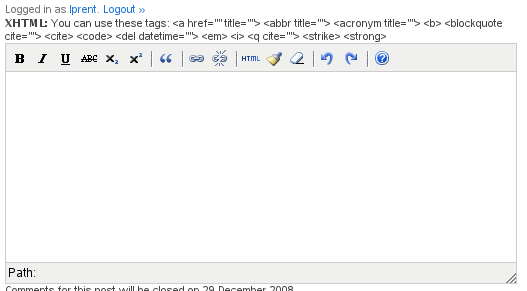 To turn it off, go into “Site Admin” in the top right, and then click on your login name in the top right again. Turning off the visual editing flag will turn off the javascript editor. However it may take a while to clear your local cache

The current limitations on the TinyMCE editor are that the BlockQuote doesn’t work (but I’m working on it), and it may have problems with browsers with strong popup controls. I’d have preferred to use NicEdit because it is smaller and closer to the site needs. However it doesn’t seem to want to store the formatting if you aren’t the the sysop 😉

Let me know of other issues here and I will see what I can do to correct them. In the meantime, I’ll clean up some of the other CSS issues like font size, removing the redundant tag message, and adding it to the reedit.