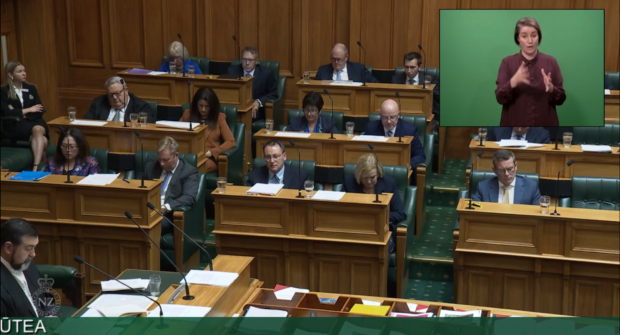 Parliament will be sitting today.

Not the streamlined digital accessible to all Parliament where all MPs could take an active part but the pared down version where five MPs are present in the debating chamber and get to throw barbs at each other.

The rest of the democratic and corporate sector in Aotearoa is agog.  Over the past 18 months we have all worked out how to do our business differently.  For me I can’t count how many Zoom, Skype or Teams meetings I have taken part in either for Council business, for politics or from a business perspective.

Digital meetings work.  There are downsides, the interpersonal contact before and after does not occur and it is much more difficult to read a room.  But there are advantages, people tend to be more civil and instead of drowning in morasses of long speeches business tends to be more truncated and to the point.  And no travel is required.  A number of groups whose meetings I attend have decided that Zoom works perfectly well.  Instead of a two hour meeting and up to an hour’s travel we now have a one and a half hour meeting.  Winning …

The development has more than a hint that Judith Collins has used the incident to deal to Chris Bishop.  It appears that a subcommittee of Bishop, Chris Hipkins and Trevor Mallard came up with the idea of a digital Parliament and how it would work.

But then National announced it would oppose the proposal and Bishop was sacked as opposition leader of the house in what Richard Harman describes as a very public humiliation (paywalled).

And now we have Auckland based Collins travelling to Wellington to shout in a near empty chamber.

The Greens and the Maori Party have expressed opposition and will not be there today.  From Henry Cooke at Stuff:

The Māori Party will not attend in-person sessions of Parliament under Covid-19 lockdown, saying National and ACT are endangering people by rejecting a virtual option.

Māori Party co-leader Debbie Ngarewa-Packer said she and fellow co-leader Rawiri Waititi would not be attending the session in Parliament.

Green Party MPs have also said they will only attend when Wellington is in level 3 – not on Tuesday, when it remains in level 4.

Collins has insisted that she was an essential worker and is justified in insisting on Parliament resuming.  From Russell Palmer at RNZ:

National leader Judith Collins would be required to fly down to attend, however. She said MPs were essential workers, and defended flying from Auckland to Wellington.

She said the government had steadfastly refused the opportunity to bring in the Epidemic Response Committee.

“That would have avoided any of this. As for the Zoom Parliament, never been tested here. The government has had 18 months, and [Speaker] Trevor Mallard had 18 months to work out how that would work. We’re looking at it and we don’t think that’s going to bring the scrutiny.

Such an absolutist view.  She has a right and will insist on exercising it no matter what the greater good is.  It is a shame she did not adopt the same approach when dealing with Ricardo Menendez March when she said that MPs have to be very careful to make sure that not only that they follow the rules, but they “follow the rules with stars basically”.

And she has danced on the head of a pin by claiming that the Epidemic Response Committee, which meets by zoom, should be reinstated but that all of Parliament meeting by zoom cannot.  She ignores the reality that National a year ago was the largest party in Parliament,  Now it is more of a rump that is in danger of becoming a minor party.

My personal view is that Collins has hopelessly overreached.  Comparing the importance of MPs being able to rock up to Parliament as being just as important as nurses, police officers, cleaners and supermarket workers is asking for a beat up.  The work of a politician can and should be done digitally right now and Auckland based MPs should do what the rest of us are doing and staying put.

She had better perform spectacularly well.  Otherwise she will look like she is gumming up the works of Government just so she can try and score some cheap political points.