How Waitangi day is changing.  It used to be a place where right wing politicians feared to go.  Back in 2004 then opposition leader Don Brash followed up his infamous Orewa speech, where he talked about racial separation and the treaty grievance industry with a visit to Waitangi on Waitangi day.  Locals responded in a way which was illegal but not unexpected.

Of course he is not the only politician to have been humiliated at Waitangi.

I suspect that back then Brash was quietly pleased at the response that he received.

Fast forward to 2019 and Brash is heading back to Waitangi, this time by invitation. And apparently this time he is going to listen.  Radio New Zealand has the background:

Former National Party leader Don Brash says he’s delighted to speak at Waitangi for the first time since mud was slung in his face 15 years ago, and will speak about the economy “and I’m going to listen”.

Dr Brash fronts the group Hobson’s Pledge which opposes what it terms Māori favouritism. He said he was surprised when Ngāpuhi asked him to give a speech at the lower marae Tuesday.

His last Waitangi speech in 2004 ended with a protester hurling mud at him.

Don Brash told Morning Report he was delighted to be invited back.

He was contacted by a local, Reuben Taipari, who invited him up for a korero. He was asked to speak about economics. Unfortunately it seems that he will take far too narrow a view of what the purpose of the treaty settlements is.

“One of the points I’m going to make is Māori prosperity will not be guaranteed by Treaty settlements.

“It’s a point which I actually owe to Rob McLeod, who is a Ngāti Porou leader, that even if we take all the investments and Treaty settlements over the last 20 something years and invest that at a 5 percent, it makes minimal difference to the annual incomes of ordinary Māori.”

While he said he had never opposed Treaty settlements, they “aren’t the recipe to make ordinary Māori prosperous”.

“Too many ordinary Māori assume that once they get a Treaty settlement, everything will be rosy.”

Of all the stupid takes Brash has ever said this is one of the most stupid.  The treaty settlements are not about increasing Māori wealth, they are about addressing terrible treaty breaches and providing very modest  compensation and providing closure.

It is interesting that the feeling is now such that Brash would be invited and that he would accept the invitation.

Maybe as a nation we are moving on from the heat and intensity of previous Waitangi days. Perhaps the Waitangi Tribunal’s sterling work is having an effect. Maybe the renaissance of Māori culture and the fact it is being embraced by pakeha means that everyone is that much more chilled. 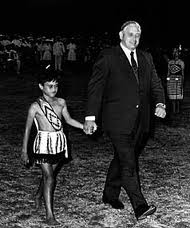 It will be interesting to see how Don Brash is treated. I think it will be in a much more chilled way than last time.