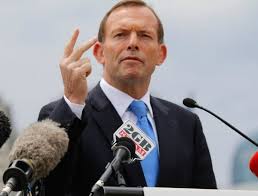 Tony Abbott is a special breed of politician.  His climate change denying tendencies are well known.  He hates windmills and without a sense of irony is deeply worried about their potential environmental effect while being totally oblivious to the damage that coal is causing to the world’s environment.  Such is the level of his hatred he has plans to establish a Windfarm Commissioner to handle complaints he is sure that will occur about these evil structures.  As long as you do not walk into them I have found windmills perfectly safe and their contribution to a sustainable future cannot be denied.

And Abbott loves coal and thinks it is good for humanity. Rupert Murdoch has a lot to answer for.  A very talented satirist would find it hard to further satirise how insane Abbott’s world view is.

Naomi Klein recently visited Australia and despaired at what Abbott’s government is doing to Australian climate change policies and to the world.

From the Fifth Estate:

Naomi Klein controversially called Tony Abbott a “climate villain” before arriving in Australia to promote her latest book, This Changes Everything.

Now she’s arrived on our shores she hasn’t backed down, and she’s not mincing words.

“One of the things I think is important about Pope Francis’s intervention in the climate debate is it reminds us that climate change is a moral crisis, that there are huge numbers of lives at stake,” Klein told media gathered at Sydney Opera House ahead of Saturday’s talk at the Festival of Dangerous Ideas.

“He calls destabilising the planet’s life support system a sin. That’s not language I use. I call it a crime. But too often we use this bloodless language, this very bureaucratic language that glosses over the huge moral crisis that we are in the midst of. So I stand by saying that these are villainous acts; they are I believe criminal acts.”

Klein is visiting Australia to promote her book This Changes Everything and to discuss its basic theme, that there is a direct conflict between what our planet needs in order to be hospitable and what our current economic system needs which is short term growth and profits above all else.

“Talking about that in Tony Abbott’s Australia seemed to make a good amount of sense, because this is a government that shows – perhaps more than any other government on Earth – what that conflict looks like and what the costs of that conflict actually are.”

Klein said market fundamentalism waged war on the taxing and regulating of corporations, but that we had to tax those who had the most in order to pay for the transition to a low carbon economy, including moves to mass transit and renewables.

“What we see in Australia is the exact opposite,” she said.

Klein said she owed Mr Abbott a debt of thanks, because he was her book’s best marketer in Australia.

“He’s proving the thesis every day, every time he tells Australians that they need to choose between the economy and climate action. That is a lie. We can have a much stronger, fairer, more stable economic system and still act on climate change.

“It’s just that we do have to change the kind of economy that we have. We can create many more well-paying jobs if we invest in renewables, energy efficiency, public transit. The latest studies show we’d create six to eight times more jobs in those sectors than if we invested the same amount of money in the extractive sectors.”

The problem is that in countries like Australia, it is extractive jobs that are commonly the only ones put on the table.

“When we look at a country like Germany that is taking this transition seriously, what we see is that it is a huge job creator.”

“They have created 400,000 jobs in this transition. They’ve also deepened their democracy because they’ve taken back control over their energy grids in hundreds of cities and towns.

“We can have a better economy than we have now if we take climate change seriously.”

“Stephen Harper has acted as this sort of malevolent older brother offering tips on how to vilify indigenous people and grassroots activists and people who dare to use their country’s laws to defend their land as some sort of security threat, and how to market planet destabilising carbon as something ethical and good for humanity.”

She said she hoped Abbott was still taking notes, because the Conservative Party was in dire straits.

In Canada, Alberta, which has had 44 years of conservative rules, the left-wing NDP party was voted in in May because Albertans were “sick of the boom-bust rollercoaster”.

“And now we have a federal election coming up in October. Stephen Harper is not doing well in the polls, so I hope that Tony Abbott is still taking notes from Canada,” Klein said.

Her conclusion struck an optimistic note.

…Klein finished by saying she recognised that while the political situation was less than ideal, Australia was full of “climate heroes”, with one of the most powerful indigenous rights movements in the world, and vibrant and innovative campaigns.

“The world is watching and cheering every victory.”