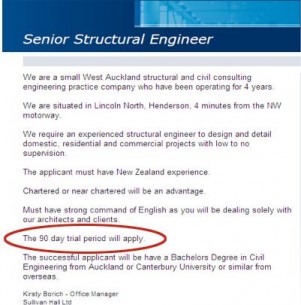 When National rammed through the first version of the 90 day fire at will law it claimed the period would be a ‘choice’ negotiated fairly between employees and employers.

Those of us know the reality of the workplace pointed out that the employment relationship is not one between equals. The idea that the employee has any choice in the matter is a farce. Employers would simply offer ‘take it or leave it’ contracts and that would be that.

Sure enough, it’s already happening. A quick search of Seek and Trademe Jobs by Darien Fenton turned up six examples of employers stating that “the 90 day trial period will apply” as a pre-condition of employment.

Now if National really believed its rhetoric about free choice then this is something the minister would be quick to crack down on, right? Here’s what Kate Wilkinson said when asked about it in Parliament today:

“Clearly it’s not compulsory for an employee or prospective employee to actually apply for that job.”

So, another lie from National. The 90 day fire at will period isn’t a choice after all, you can be told to take it or leave it when you apply for the job and there’s nothing you can do about it.

Remember that when they try to spin you the same line over selling the fourth week’s annual leave.

[PS – anyone noticed how this job ad gives lie to the claim (unsupported by research of course) that the fire at will period will apply to new jobseekers and the disadvantaged? This role is for an experienced structural engineer for heaven’s sake! Someone who will have to work with ‘low to no supervision’ and have ‘a Bachelor Degree in Civil Engineering form Auckland or Canterbury Universities’.]

280 comments on “National admits 90 day period not a choice ”