Today is a national day of action against welfare reforms with protests planned around the country.

There has been  lot of opposition to Bennett’s welfare reforms from opposition parties, online journalists like Gordon Campbell, bloggers, and members of the public.  They are clearly unworkable and, by Bennett’s own admission, they will be only selectively enforced, based on who WINZ staff decide are the at risk clients. The results will be that some of the people most in need will have their benefits cut. As a result, it is children  that will suffer the most, with it having a long term impact on their lives.

Some crucial warnings of not meeting so-called social obligations (such as beneficiaries being required to send their children to early childhood centres, or attend job interviews) will be made by phone. Not responding positively to these warnings could lead to the cutting of benefits, even if the recipient doesn’t get the message.  It is all very arbitrary and punitive, based on prejudices and misinformation.  It will do nothing to improve the economy, increase the amount of jobs paying a living wage, or to help those most in need.

[Update:  My report from the Henderson Protest]

The protest in Henderson was good humoured and friendly, and had a good turnout for the middle of a weekday – I estimate about 80-100 people.

It began to Henderson Square, one of the entrances to the Westfield Shopping Centre.  There were speeches, and some passers-by stopped to listen.  One or two protesters stood out on the street, holding placards up to passing traffic – plenty of horns honked in support and at other places the demonstration went.

Organisers announced that Unite and the AAAP (Auckland Action Against Poverty) had helped organise the protest, and that it had the support of The Maori Party, Mana Party (Mana Party Press Release), and the Greens. They said that representatives from several unions were present (I didn’t catch all the names, but it included NZEI).  A protestor was carrying a flag for the New Zealand Nurses Organisation, and another couple of people had red placards in support of “kids”, that also said “Vote Labour”.

The protesters were a diverse group: ethnically, age (including young parents and the elderly) and, as far as I can judge, class-wise. There were beneficiaries, some who spoke of their hassles with WINZ, and union members.  Some of us were fairly scruffy in our dress, others looked smarter – though the latter included journalists.  One News was there throughout, and there was a guy from Chinese TV filming.  A police-woman kept herself busy making a home movie.  Speakers included immigrants from Europe, China and the Philippines.

Speaking through a megaphone outside Henderson WINZ,Sue Bradford said this was just the beginning of protests against Bennett’s vicious welfare reforms.  She said we need to end old divisions and unite in resisting reforms that are worse than the ones of the 1990s: paid, unpaid, various kinds of beneficiaries etc, all need to work together.

John Minto, also speaking outside Henderson WINZ, said there will be a National Day of Action on housing on November 7, with a nationwide demonstration in Wellington.

The demonstration walked to Henderson WINZ, taking a turn the police didn’t approve of.  So with some good humoured joking amongst the protesters, we turned and cut through the car park of a supermarket.  We were given a traditional Tangata Whenua welcome at Henderson WINZ by one of the protesters.

There were several speeches. The man from China called on John Key to support human rights in China, and for Tibetans.  Penny Bright, there with her dodgyjohn banner, A woman was carrying a handwritten placard that said:

But I hate this WAR!

We then walked to Paula Bennett’s office where there were more speeches, while the police protected Bennett’s territory.

And Otago Daily Times on the Dunedin Protest:

Dunedin’s unemployed and workers united in their opposition of proposed benefit reforms during a protest through Dunedin streets this afternoon. 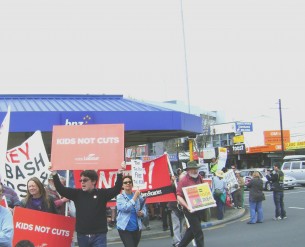 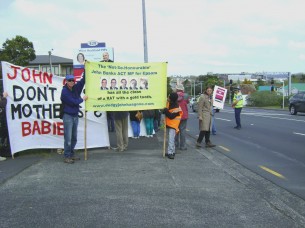 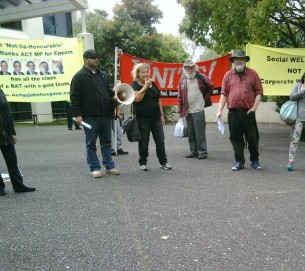 [Update: Articles on the protests on Stuff and TVNZ One News site.

Article on Voxy, reporting Hone Harawira’s congratulations to the protesters.  Hone also refers to a constituent:

“The actions of one of my constituents, Sam Kuha, is highlighting the struggle beneficiaries face. Sam is now in his 21st day of his hunger strike. Frustrated by not being given a $40 food voucher from WINZ because his benefit does not go far enough, Sam has decided to go without food in order to bring attention to people who live in poverty”.

NZ Herald article on the Henderson protest, in which author Simon Collins reports on stories of some of the protesters:

Adult literacy lecturer Grant Cole, 50, carrying four-month-old baby Tama, came because the Government said it had “no money for the poor” even though it could find hundreds of millions to bail out finance and insurance companies.

Jenny MacGibbon, a 57-year-old widow, caught a bus and a train to get there from her home in Beach Haven with her daughter Sian, 27, and grandchildren Che, 4, Rhiannon, 2, and Zahn, 9 months.

Both adults have received letters saying they will have to look for work when the new work-testing regime for sole parents starts on October 15. Jenny MacGibbon’s husband killed himself six years ago.

“I brought up my kids. Now I’m helping my kids with their kids.”

Very good TV report from the News on Dunedin TV: h/t Bill for the link.

[Update: added photos of police woman filming the protest, to highlight some of the discussion below on the issue.  She was filming for the whole of the demonstration. 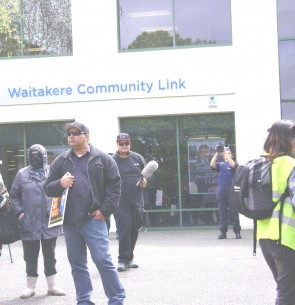 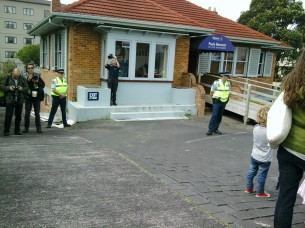