National’s advice to the poor – you are on your own

Todd Muller, he who mucked up six years of Parliamentary pecuniary interest registers because he forgot to mention that he had an interest in a Kiwifruit farm and a second family home has come out with advice for poor people.  Here it is: 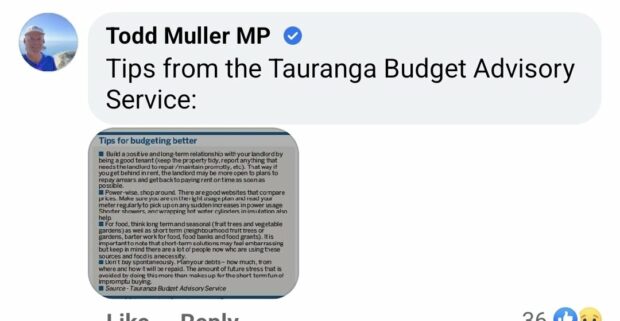 This is from a man who owns two homes and a Kiwifruit farm.

And a party that has offered tax cuts that will mean that those on the minimum income will receive exactly precisely nothing while the leader of the opposition will receive $7,000 in tax cuts and a further unknown amount on the six properties he owns and does not actually live in,

But what proposals does National have for the poorest amongst us?  No money only platitudes and lectures on how they can do better.

If National was intent on putting money into people’s pockets then it could do this by adjusting the bottom tax bracket.  That way everyone would get an increase.

The way they have structured their policy would mean that the wealthiest and owners of multiple properties get most of the benefit and those earning up to $14,000 get nothing.  A clearer case of class warfare I cannot imagine.