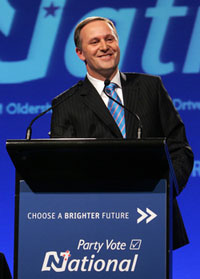 The government’s first hundred days are up and they’ve decided that this signals the start to a multi-pronged political offensive. They are now moving rapidly to make a slew of legislative and policy changes that were either not announced or mentioned only briefly before the election. The Herald has noticed too, writing: “the Key Government has lately turned to topics it did not want to say much about before the vote”.

Prison privatisation, slashing ACC, cuts in ministries’ funding, abandoning climate change policies, cutting funding for public transport, undermining New Zealand superannuation, weakening the RMA, removing the bioethics council, and politicising aid are things National didn’t want to talk about before it got elected because it knew they are unpopular. Now it has power it is moving quickly to put them in place.

National’s calculation is that if it can ram through a range of changes while it is still popular there won’t be time for a backlash and the opposition will be spread too thin to effectively counter. National is also counting on the notion that if it can these changes through early in its term they will have time to bed in and public opposition to them will dissipate.

It’s classic blitzkrieg, complete with distractions like cycleways and the re-institution of knighthoods that draw away the media’s attention. Meanwhile the deepest attacks slip under the radar, like the increasing politicisation of the public service (Nick Smith’s select committee hijacking, the sacking of Ross Wilson, the attack on Barry Mathews, gagging boards and CEOs, banned words).

What are the next targets? My picks are workers’ rights, the Electricity Commission, and the SOEs. Already, they’re setting up for an argument that the SOEs ‘need’ to be privatised, or at least part-privatised, by demanding higher dividends. Kate Wilkinson popped up the day before the Jobs Summit to remind business that even though it was off the agenda for the summit National was ready to take an axe to employment rights.

Before we even know what is happening National will have made sweeping changes across the board. At least, that’s what they’re hoping. The question is how we respond.