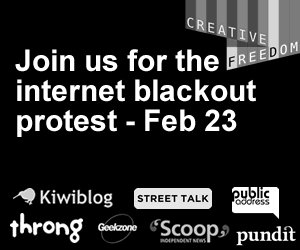 It is always interesting watching people and organizations jumping on bandwagons of popular movements. In the case of the section 92A of the new Copyright Act, there was a genuine movement by the denizens of the local net and artist communities that we participated in.

Over the weekend Disk Smith Electronics did exactly that by having a sale promoted as a blackout. Of course they didn’t bother to acknowledge the original, and I’m now expecting to see other retailers follow suit. In the same vein Rodney Hide of ACT did the same thing at the ACT party conference. This is in his usual populist vein that has transformed the ACT party from one of principle to one that is more distinguished by its clowning.

For instance Hide’s clowning around with electoral law by wearing a jacket with an ACT logo and having one of his minions complain about it. That eventually wound up in the hands of the police after the electoral commission found that his supporters claim that he’d breached electoral law.

The reason that Hide probably opportunistically added a call to dump S92A to his conference speech was that the work towards a code of conduct has been stalled. TelstraClear announced a few days before Hide that they were pulling out of the Telecommunications Carriers’ Forum (TCF) attempt to get a workable code of conduct.

The reason for the TelstraClear decision was

It is not our role to make bad legislation work,” he says. “The industry had no input into section 92A. [The draft code] is bad for our customers. Customers and businesses have spoken via blogs and petitions and also directly to us. We have listened and we have agreed.

I think that is unlikely. It is more likely that the blackout and the publicity surrounding it provided a convenient excuse to avoid talking about the costs of running an effective code of conduct system. It is in everyones best interests to establish a faster and cheaper system for maintaining a workable copyright regime in NZ that does not depend on the technical illiterates of courts and parliament to control. Because of the nature of the programming communities and the internet, decisions have to be made by informed people in short periods of time in a summary justice system. These can subsequently be checked on appeal to the courts if required. The question with S92A is who does that summary justice and who pays for it.

RIANZ appears to have been the primary culprit in causing the TCF’s initiatives to fail by short-sighted adherence to the narrow and immediate interests of their members. They appear to have been moderating their position recently. So TelstraClear appear to have decided to attempt to derail the process instead. This was promptly hailed by both InternetNZ and Creative Freedom NZ as the death of s92a. However neither had any suggestion about what would be a suitable process for handling the real problem of the ineffectual control of copyright violations. Matthew Holloway unhelpfully said

The Creative Freedom Foundation wants a reasonable balance between the rights of artists and everyone else. That is why we urge the Government to repeal the law altogether.

Duh! How exactly? At present it looks like he is intent on destroying something without having any useful ideas about what to put in its place, and I cannot find much on their site about alternatives. That is also grandstanding – just like Rodney Hide. While InternetNZ piously wants to continue with developing a code of conduct. They appear to not realize that without the force of legislation behind it, it is a meaningless gesture.

It has been clear for some time that what would be required is an independent adjudication process backed by legislation. The network users don’t trust the ‘rights’ holders to not do false accusations or even what is possible on the network. We also don’t trust the ISP’s to know what a copyright looks like – it would require a lot for a netmonkey who has the power of supply to to suddenly become proficient in copyright law.

It is properly the role of the government to act between the diverse interests of groups in society. Hopefully Simon Power will recognize the spoiler efforts by narrow sectional interests later this month. At present his stance is

Ms Curran raised the issue in Parliament on Thursday but Mr Power said he was not going to pre-judge the negotiations and would wait for the deadline.

In the meantime the TCF should continue their efforts to get a workable code of conduct. This is a unique opportunity to get a workable regime for copyright and the net in NZ. In the end what is required is a balance between the workability of the net and finding a workable solution to the types of piracy that destroyed the sales of Siones Wedding. The current system acts as a brake on investment in creativity in NZ.

Kudo’s goes to the TCF and to Clare Curran for continuing efforts to get this process to work. Brickbats to RIANZ, TelstraClear, InternetNZ, and Creative Freedom NZ as being good at destroying the process and bloody useless at suggesstions to build a good working copyright regime. Then of course there are the grandstanders wanting to jump on the bandwagon – they are clowns.