While Bill English has “nothing to add” except the “this just an employment dispute” lie, the National Party’s Dirty Politics Machine has been fired up. Yesterday it was feeding its social media troll army a nasty talking-point to pass around in order to discredit the worker who Todd Barclay – allegedly – illegally spied on.

. . . Todd Barclay came to believe – one way or another – that they [Barclay’s staff] were saying things about him that are outrageous . . . There was a huge cultural conflict between these people and this led him, I believe, to think it’s a good idea to tape these people . . .

. . .  thus leveraging his RNZ spot to broadcast that Barclay’s – alleged – criminal behaviour was – one way or the other – justified.

Yesterday, newsroom.co.nz ‘s Melanie Reid reported, inter alia, that NZ Police had re-opened its investigation, that the compainant had been re-interviewed, and that contents of one of the conversations – allegedly – illegally recorded by Todd Barclay had involved a discussion about “sex and drugs”. 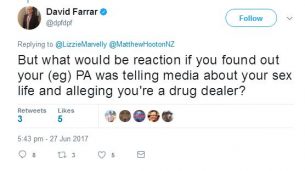 . . . essentially, a variation of “she deserved it” and a sick distraction from the fact that it is a crime to intentionally intercept private communications you are not a party to regardless of the content of those communications.

Unless Hollow Man Hooton and Fluffer Farrar have heard Barclay’s – alleged – recording(s) or been told the content, upon what basis do they feel entitled to state by innuendo that Barclay’s – alleged – victim had been so unprofessional and out-of-control as to be accusing Barclay of being a drug dealer?

NZ Police need to speak to both of them. And soon. It’s possible these Dirty Politics Machine principals could confirm the recording(s) exist and/or that the content has been widely shared. Does their associate Cameron Slater have copies? Has the material for their innuendo come from the 9th Floor? Did it come from Ministerial Services? More likely, Hooton & Farrar have “nothing to add” to the investigation and have been deliberately spreading a lie. In which case, NZ Police need to remind them of the possible consequences of using their public platforms to maliciously attack a complainant in a criminal investigation. It amounts to intimidation.

Of course, this assumes that NZ Police is actually serious about its investigation. As unlikely as that may be, if it is true, its not beyond the realms of possibility that Hooton and Farrar could, potentially, find themselves in the dock alongside National Party Board Member Glenda Hughes facing a charge of attempting to pervert the course of justice.