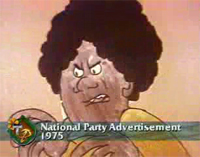 In the heat of the Lockwood Smith controversy yesterday, some of our right-wing readers had a go at John A for posting a link to National’s racist 1975 election ad with the comment that “underneath they haven’t changed”.

In light of this, I thought the comments in the Herald today from National’s first Pacific Island MP, Arthur Anae, were rather interesting:

Arthur Anae, who is Samoan but was born in Fiji, said it was a ploy by Dr Smith to win votes from the “white community”.

“It’s bloody insulting that he said that. Some people have been here over 60 years. How dare he say that? Now people understand why I am no longer part of that party. It’s a clear indication of what the underbelly is over there towards Pacific people.

“You do have an element of redneck that’s in there and that surfaces when you read between the lines. I feel sorry for John Key and Bill English, who I believe firmly do believe in the Pacific community.

“This is what happens when people want power, they become immigration spokesman so they want to hit the lowest they can with what they say to win some votes from the white community, shall I put it that way. That sucks.”

Says it all, really.